Hi Guys
Well, this morning didn't go too badly. Both my daughters tell me I didn't sound a total t**t or too posh! So praise indeed!
I got up at gnat's fart and fed the animals and then got changed and had a bit of a splash -The smell of chicken poo tends to increase with the reduction of space and I thought a recording studio might be a bit smallish. I set off to the great metropolis (Derby) in the rush hour traffic, counting my blessings that I am now retired and don't need to do his madness anymore. I managed to get bullied into the wrong lane and missed my turn so travelled around Derby a bit until I found my way again. It was obvious I was going to be late by now and I could feel a bit of a panic rising. So I asked myself what was the worst that could happen and decided there was nothing bad could happen... I wasn't going to lose money, or a job and I could always pull over, phone the studio and tell them I was unable to make it.  And then there I was, 10 minutes late but safe and sound. As I pulled in to the car park a technician phoned me to see if I was okay. I apologised for being late and he came out and led me into the studio, saying  No probs as they were running a little late because of a particular caller. I sat down in front of a mic with my cosy head phones on and we were off.
Strangely the basket of produce I took was quite useful in the interview. But colourful? Not too sure about that. here is a pic of the basket and contents 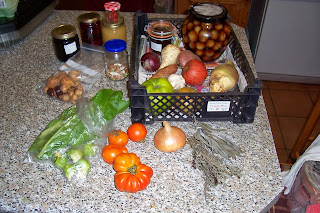 We did talk about the preserves and the makings of stuffing and of gifts for friends and family. we talked about living within our means and saving a little each week towards Christmas, about buying too much and thinking about what you really need. All in all not too bad.
The caller who was making the show run late was an older guy whose son-in-law was on £50k+, they had 5 children and he and his wife were losing the child benefit and were struggling to cope and may have to get a loan for Christmas. I was fascinated!
I have nearly cleared the greenhouse today, just half a dozen tomato plants left to cut into pieces, bag and take to the tip. I never compost potato or tomato plants because of spreading disease. The very last kilo of 2013 green tomatoes is now sitting in the kitchen, wondering if it will bother to ripen or go squishy.

EGD has just called for advice on mending trousers. She had a go and broke the only needle on her mum's sewing machine and felt discouraged. I have shown her how to sew seams and the wonders of wonder webbing for frayed hems. Hopefully she will feel confident to have a go herself next time.
I'm feeling a bit tired tonight and I have still to fetch D. from the pub. Hey Ho, not long to go. It's tiring being a super star!
Anybody got any good recipes/ideas for sweet chestnuts?
Goodnight dear frugal friends.
Gillx
Posted by Frugal in Derbyshire at 22:22