My New Picture and more preserves

This will be my new picture as soon as I can find out how to load it so that it appears on the side bar and as a follower (only managed to put it on my profile in the side bar so far) Angelsy Allsorts suggests I be a chicken so here is a  picture of a Derbyshire Redcap, so appropriate for Frugal in Derbyshire don't you think? 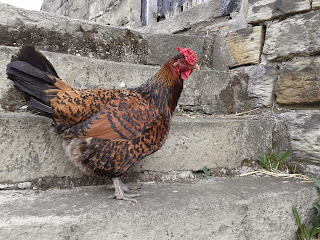 This morning EGD called again and finished off the shredless marmalade. The fruit had been straining all night and produced 4 pints of juice.. the picture on the left shows what she made from this. The picture on the right shows what we made yesterday. To the rear is the marrow and ginger jam I made from Frugal in Suffolks recipe and the jars in front are RGD's red onion chutney. She took these pictures and I wasn't going to show them as hers are for presents. She said it didn't matter as only her mum was likely to see this blog and she had actually asked for shredless marmalade in her hamper.
The colour of the marrow and ginger really is very good. I shall be making a teamed ginger pud with spoonfuls of this jam in the bottom of the basin this weekend mmmmmm 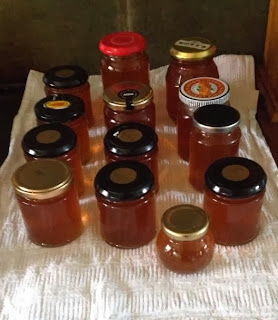 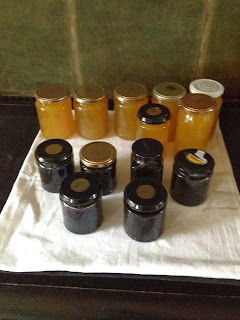 After we cleared away my friend came to cut my hair, she had her daughter with her as she and EGD were off with their dogs for a walk. So the two girls and my friend stayed for lunch and after my hair was cut and some more friends arrived to borrow a map they wished to photocopy, D. and I set off for a cup of tea with a friend of ours, who we have neglected badly of recent weeks. we finally got home 5 hours later!. So after a meal of left overs we have finally settled down  and are going to watch "The Life of Pi" while i do a little hand sewing. and then bed!
Welcome to my new followers on Bloglovin
In haste...Good night dear friends
Gillx
Posted by Frugal in Derbyshire at 22:15