Little bit of a de-clutter today - the sock drawers! Not mine you understand, but the grandchildren's. They are always leaving clothes here and I do try to keep a change of clothes for each and also for the shared lives guys. What a mis-matched, holey lot there was! There was only ten decent pairs to put back into the drawers. I will explain what I did with the odd socks later.
I then had a look at my working shirts, as I noticed that two were was very frayed around the neck when I was ironing. I knew I would be sewing today, so I thought it would be a good time to turn the collars. On inspection they revealed I had already turned them! So nowhere to go with these, very frayed, thinning shirts. Too far gone for patchwork, I took the buttons off and threaded each set onto a piece of cotton for the button tin and I ripped the rest up.. more later
When EGD hasn't been working, or looking after her own house, she has been here with me making presents. She has attempted some sewing that has been a little more difficult than she is used to, as she only started sewing in the last few months.  She has done really well and we will take a photograph of it before it is wrapped and then put it on the blog after Christmas. I have been sewing at the same time as I am a two-machine household! While we have been cutting out I have save been saving the trimmings.
You know what is coming I expect -
I sewed an oblong of two pieces of off-cut material approx 36 x 7 inches and stuffed it with the ripped  shirts, holey socks and sewing trimmings to make a draught excluder. Don't you just love it when stuff comes together?! (sorry about the quality of the photos) 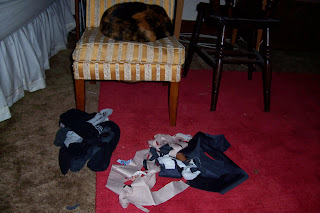 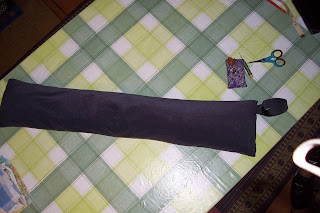 Note the loop on the draught excluder. This is to hang it on a hook I have behind the door, for when I don't need it or it is getting in the way.

Just in from the garden with some fresh parsley as we are having fish tonight with our Pink Fir Apple potatoes, parsley sauce, peas and spinach.

We watched The Tudor Monastery Farm again last night and thought it much better and really interesting. I DO love Ruth!!
Also watched Adam and Nigel's new series on growing and cooking their own food. Some of it was good. I enjoyed watching the growing of the Durum Wheat for making pasta. But, as usual, Nigel, who is a lovely bloke, wound me up over his "simplicity". Every time I watch his programmes, (which are cooking pornography) he says he is being simple and then complicates a perfectly simple dish with more (extremely expensive) ingredients. I doubt you will ever see Nigel at Sainsburys buying cooking bacon. Anyway last night they had asked shoppers in the street if they had ever cooked  roast beef. None of them had for various reasons. So Nigel reckoned that he could show them how to make a roast beef dinner SIMPLY and easily. Well!! the basting juice was a work of art (banana shallots no less!), the brussels had fried bacon and almonds with them (isn't that a meal in itself?) he also made a huge yorkshire pudding on top of mixed roast vegetables. The roast potatoes were "normal" as was the beef. They then invited the people they had interviewed to sit round a huge table to eat the roast beef dinner. They all declared it delicious.. they would wouldn't they, they  never said they didn't like eating it, just cooking it! Then Nigel and Adam smugly declared that the meal was a success and that they could hear people chatting together, suggesting that the meal had caused that NOT the fact that they were eating around a table. They would have chatted just as much if it had been pizza.
And as for making a perfectly reasonable and tasty Ragu for the lasagne when demonstrating they could make one as cheaply as buying one ready made, I thought this was going well until they threw a huge piece of  pork spare rib into it to improve the flavour etc. That would have made another meal!
Rant Over.
Getting ready to settle down to some cutting out and then sitting in front of the TV to do some hand sewing.
Good Evening All
Gillx

Posted by Frugal in Derbyshire at 18:22