More bonfires and getting started on Christmas

Hello Again.
Having lots of problems with the internet and the phone, so I haven't written a blog for the last couple of days or so.
We have had a good weekend in the garden and the field. D. and the guys brought in the last of the branches from some clearing they had done a few weeks ago. D. managed to get quite a large pile of small logs and the rest went for another fire this weekend (Adam is here again!) One of the other guys had munched some in the muncher (!) to put down in the chicken run where it is a bit boggy, but we can't justify doing that to all the branches because of the electricity and the ash from the fire is good for some parts of the garden and greenhouse.
Here is Adam yesterday, his second day of burning twigs - gosh, we know how to treat a guy!! 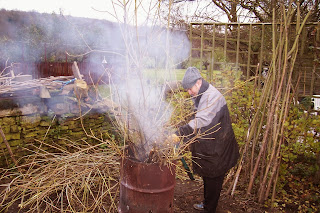 The straight poles behind him are for next years sweet peas. Though Adam thought they would burn well and we had to keep taking them out of the brazier.
The family called in for tea yesterday, so I whizzed out to buy two Lidl (not big) chickens and defrosted half of the Christmas stuffing to go with them, I can soon make some more. So today I made a chicken pie with the leftovers for D. and Adam next weekend and then put the rest into the pressure cooker to make a soup for wednesday. Tonight we had cockerel curry with egg fried rice.

On countdown to Christmas now. Yesterday EGD asked me if I had spent the £10 Argos voucher I had. Frankly, I had forgotten about it, so I had a look and it expired today, so I set off hotfoot to Argos, which is 5 miles away. I planned to get a Scrabble set for YGD to go with something I am making her. They had a special offer on with 2 games for £30 (instead of £40) so I bought 2, which with the £10 off meant that I got one game free. Brill!
While I was in town I went into B&M (or is it M&B?) and bought  four boxes of red oxos for D. He has taken to drinking them instead of coffee or tea and at 15 calories a drink (I googled that) are better for him than sweet coffee. I also bought some tinned sardines and pilchards for the stores. oooh yes and some Chivers orange jelly and mandarin pieces for the old fashioned orange trifle I always make because it is YD's favourite.        A message for Cro here -they had Fray Bentos tinned pies too!
I finished a project for Christmas yesterday and remembered to take a picture of it to show you after Christmas. So that's two presents down and only 26 to go! YD and I are going shopping on friday with our Christmas savings. We save £5 per week with my friend and her daughter and then we have cash to do the markets and the like. I also started a little sort-of sealed pot thingy about four months ago, which, it is hoped, will buy us lunch while we are out shopping. I have no idea how much is in there. We might have enough for a proper sit down meal or just a sandwich, we don't mind.
I think that that is all for now.
Welcome new Bloglovin friends. Please drop a comment in whenever you feel inspired to. Unless I am missing something - and I probably am knowing me- I can't always access any information on followers on Bloglovin, so don't always get a feeling for what may interest you.
Night Night
Gillx

Posted by Frugal in Derbyshire at 21:56