Hello fellow Frugellers
Over the last few days I have been pushing myself to do the myriad of jobs on my HUGE list. We are  less than a fortnight away from our big bash in our field, on Thursday we make a swift trip to Looe in Cornwall for a sea fishing trip, we get back Saturday afternoon and friends arrive on Saturday evening, we are out for a gig and then they will stay for a while. The gardens are calling, the goosgogs are ready for picking and so and so on....
I have also been very busy with the civic society. We have launched a sub-group with some independent folk (engineers, architect, Councillors, canal experts) to influence the development of a large brownfield site in the midst of our area.
We formed our society in 2009 in response to the proposed development, We have no issue with development, but did want to influence the type of houses built and the manner in which they are built. The line of a canal runs through the site. We campaigned for the line to be protected so that nothing was built on it , that way the canal could be reinstated when the funds were available. We succeeded, so far so good. Then earlier this year we were told by a respected engineer that the canal would never be put back in water as when the houses were built there would never be enough room for spoil and movement of plant and that infrastructure would have to be heavily disrupted to ensure that the appropriate drainage etc  could be put in place.  Mmmmm what to do? campaign for the developers to reinstate the canal at the same time as the development! Anyone who knows anything about planning, housing developments engineering, etc will tell you that this is no small order. In fact it is a HUGE ask. The sub-group we have set up is getting a lengthy and learned document together to demonstrate the feasibility of such a project.
This has taken up much of my time and I thought it manageable as we tend to reduce our meetings through the summer. Then we heard about THE BELL.............
The old Mission in our village has been derelict for six or seven years now. Two years ago when we found that the war memorial ( WWI and WWII) was still in the building festering away and deteriorating.We set up a campaign to save it and re-site it in our little village hall. This we did and have had two wonderful Remembrance Day events since. Outside the church hung a bell and we have hoped that the folk at the mother church a  mile away would do something about it before it was stolen. They now have and they have put it up for auction!! This bell was bought by public subscription by the residents of the area years and years ago. So here we go again another campaign!!
We have set up a fund to buy the bell back for the village.  Over the weekend I cobbled together and printed a letter and over a couple of days with three other committee members posted nearly 400 letters to residents of the area explaining what had happened and asking for pledges. I am pleased to say that I have had several phone calls today already. So fingers crossed !
Yet again my post has nothing to do with Self Sufficiency or Frugality ! I will try harder next time.
Off to get ready for our fishing trip before our shared lives guys arrive. We have a couple of tip runs to do (a favourite job) and when we take stuff to the tip is really is rubbish!
Back Soon
Gillx

This is Me (sorry)

As promised a picture of me - I told you that I was a 69 year old weather beaten old bag Kev! 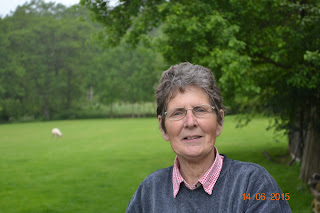 Here is the seat I use when drinking my early morning cuppa. it is a bit mizzly today, but you get the idea. The next two pictures are my view whilst drinking said cuppa. 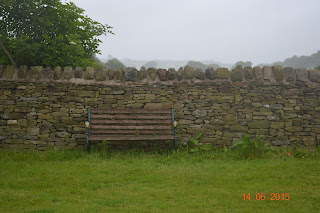 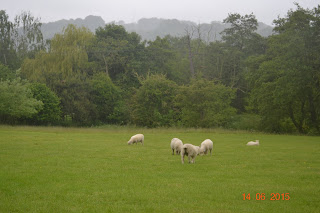 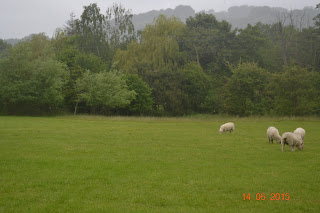 Looks ideal doesn't it? and indeed it is, as nothing beats the Derbyshire Countryside.
I'll take some pictures of my corners of shame another time to balance them up!
All for now, cooking tea for the festival fairies, who are currently pulling nettles.
Love
Gillx.
Posted by Frugal in Derbyshire at 16:13 31 comments:

A NEW Mower and Party Preps.

After the demise of our trusty grass cutter and weeks of trying to get a second hand replacement we have finally taken the plunge and bought a NEW ride on mower. The reason we have bought new after looking for ( and failing to find)  a good second hand one is that we will be here for a few more years yet, so we will get our money's worth. This piece of kit is powerful enough to pull a trailer as well should we want to move heavy stuff in the field. You might wonder why we don't just keep sheep or beasts on it all year, which would indeed keep it down. We have found that keeping poddy lambs is more manageable for us as we really haven't the backs for shearing, foot trimming, worming etc that goes with keeping adult animals anymore and we can rest ourselves AND the paddock over the winter. The winter resting up means that we can stay here a little longer, neither of us wants to leave yet. David says he is going out feet first which is a little extreme!

Last week David played with his new toy and cut most of the paddock, picking up the grass too in half the time it usually takes. He has cut much of it extra short as we have our "Festival" in three weeks time when a couple of dozen tents and 200 odd people will be gathered in our field, playing games, singing, dancing  (and maybe the odd drink or two) and generally having a good time.

Friends and relatives, who call themselves "Festival Fairies" will drop in over the next few weekends to help us get the place safe and tidy. these sterling folk will also help us to clear up afterwards.

It is dull today, but I'm hoping it will be better tomorrow when I will take a selfi ( or get one of my lot to take a pic) of me for Kev ( An English Homestead)  who asks us to show our faces ! and I thought I would also take a picture from the seat that I use for my morning cuppa as per Sue (Our New Life in the Country) I might take a pic of the new mower to in case you are interested.
Just seen a picture of Prince George with his little sister. Do little boys still wear long socks with their shorts when they are not page boys or in school uniform?
Back Soon with the promised pictures
Gillx

Of Swarming and Pickled Eggs

Hello
It's been a warm day today and I have little energy for digging, but it must be done...maybe tomorrow!
We've had another "swarmy" week which means that we are now back to the number of hives we prefer to keep with a couple of colonies to sell.
Here is a view of bees leaving Hive \No 11. My view was from the rear so you cannot see that the front of the hive is covered with bees just about to take off, though you can see plenty in the air. 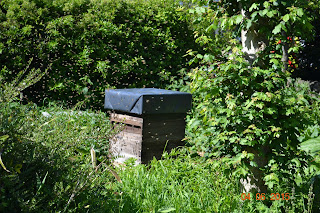 This next shot is of them deciding where to go next. If you look at the shadows the bees show up well against them. 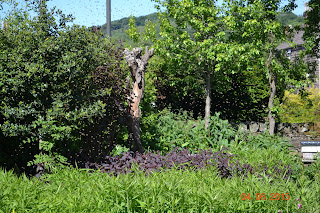 Here they are settled. You can just  make them out hanging from a branch in the pyracanthus hedge. David has placed a brood box of frames under them with three frames removed. He then knocked them in, replaced the frames and put a lid on. They are now snug as bugs in rugs!. 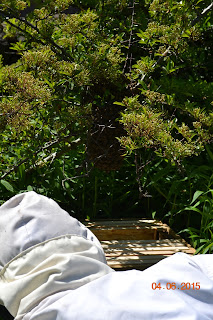 Note the fine piece of patching on David's hood.

I have been doing a fair amount of dog sitting this week for one reason or another. Here is my youngest daughter's dog Sammie snoozing on a sofa with my cat Dixie. 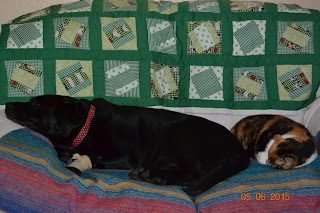 We are still getting quite a few eggs from the hens, though we have sold less this week as the road has been so busy. So yesterday I made some pickled eggs. Even if people don't like them to eat as just pickled eggs they can be turned into tasty egg sandwiches with a spot of mayo, when we are short of eggs later in the year 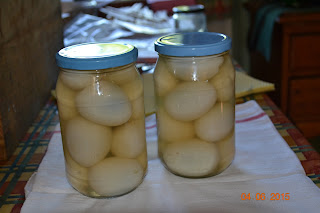 For these two jars (Mayo jars)  I hard boiled 22 eggs.
I heated together one and a half cups of white vinegar with one and a half cups of water and a teaspoon of salt. Into this mix I put a tablespoon of pickling spice, a bay leaf and two crushed garlic cloves tied up in a small piece of muslin. While this was coming to the boil and simmering for ten minutes I put the peeled eggs carefully into the two sterilised jars. When the pickling liquid had cooled slightly I removed the spice bag and poured it over the eggs and closed the lids tightly. These should keep well for quite some time. Some people keep them in the fridge, but I don't until I start to use them.

So sorry to hear of the death of Charles Kennedy this week. I considered him to be a good, principled man. I felt the same when John Smith died. There appear to be so few "proper" politicians nowadays.
The sun has gone in so I might do a spot of digging
Bye for now
Gillx