Am I the only one that disagrees with  "MOTHER'S DAY"?!
Since my children became adults I have asked them not to bother with Mother's Day. It was difficult to ask this of them when they were at school as there was such a build up with crafts, card making etc. and I didn't want them to feel too different from others ( well no more different than being my daughter makes you!) and I always supported them to remember their Grandmas. But personally I see no need for this, increasingly expensive and often complicated "celebration".
When I was a little girl, every spring at Sunday School, we celebrated Mothering Sunday, when we were given a little card to give to our our mothers which they would use as a bookmark in their bible or prayer book. If we could find some, we would also pick a little bunch of primroses. In truth I thought even that was a little mawkish and unnecessary as my mum KNEW I loved her..every day!
Just realised that after my post re. Wedding Anniversaries I sound a right old Grinch!! I'm not honestly ! I love a good party....just because....for no reason than to have a good time and see friends and family...must there be a reason? must there be a gift? As this year goes on I am bound to blog about a mega-party we have in the summer  (July this year)....just because !
D. and I have been pruning the apples and willows in the orchard today and yesterday. The chicken house is in the orchard and soon, when the planting starts, the chickkens will stay in the orchard all the time as they dig up seeds and seedlings and shred plants in the veg patches. They could  have over an acre of field to forage in, but they won't and would far rather jump over the walls and grub around the garden demolishing the vegetable crop. So they are kept in the orchard from which there is no escape (its also fox-proof)
Here is a pic of some of the hens enjoying the sun today. They are in the field because D. threw some corn down  there ! If only they would stay there! 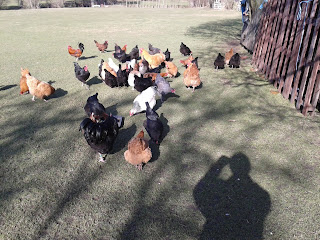 We like to think that we waste nothing and many tasks that we do have more than one result. For instance today when we were pruning and reshaping trees in the orchard we had several piles for different uses. The willows yielded some whips for weaving and garden structures and supports, some wood for burning on the fire, some sawdust for the rabbit hutches and hen houses and the remainder will go through the "muncher" tomorrow for garden mulch. We will save the munchings from the apple twigs as  they are so fragrant when burnt and D. promises me that he will make me a smoker by summer.
Collecting and carrying the twigs sawdust etc is made easier by my BIG BAGS!.
Below is a picture of three of these bags, outside the rabbit house. They contain sawdust from D's sawbench, straw from a large bale and logs from the tree work. At other times they contain kindling for the fire, or hay for the rabbits or prunings from the garden... they are extremely useful. 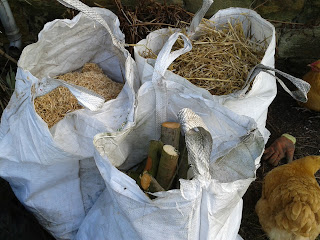 If they look familiar to you , it's because they started out life like this....... 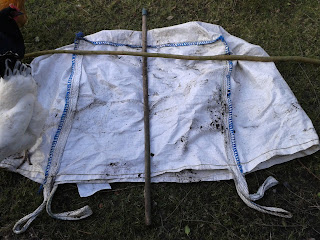 Yes it's an old tonne bag, which are non-returnable (and often refused at the refuse tip)  I have placed sticks across the bag where I cut with a sharp stanley knife. Note that the corner handles are placed together. I then sew along the two cut edges with a sharp large-eyed needle and thread. I save the thread from the top of feed or potato sacks as it is fine and yet extremely strong. I then turn the bags ( You get two from each tonne bag) inside out so that the edges, which can fray a bit, are on the inside. There you go ! two Big gardening bags at no cost whatsoever and so many uses.
Lastly I want to show off my attempt at "upholstery". D has been using the old chair below at his computer for YEARS. The seat and cushion have both worn through. He loves this chair as it is just the right height for the job. So when I found that the seating cushions from an old sofa (that had been given to D for him to lie on to work under the car!) were in extremely good condition I thought it would be ideal for the job. My friend Becky had given me some very smart waterproofed material which I liked the look of, so with stapler in hand I re-seated and covered the chair. 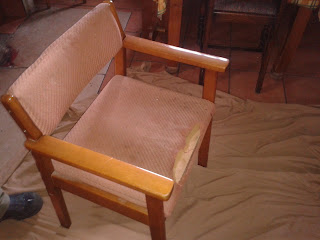 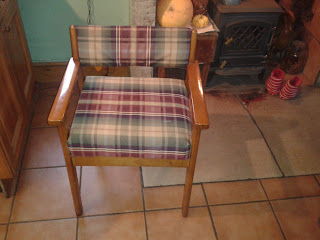 I'm quite pleased with it and there was enough material left to cover two breakfast bar stools too !
I reckon that you have probably heard enough from me for now so I'll sign off hoping you keep well and have a great weekend.
Gillx

Posted by Frugal in Derbyshire at 20:25