Day one of my four week challenge

Started the day with a bowl of porridge, which will be my usual breakfast for the next 4 weeks I think! Not a a bad start to the day and keeps you feeling full until lunch.

This morning I've had a bit of a prep session.
Firstly I made some batter with half a pint of milk and my largest egg. Reserving a cupful I made 6 pancakes.
I then made half a pint of cheese sauce. Reserving about a two thirds of this I chopped and cooked in the microwave a quarter of an onion. I mixed the onion with the cheese sauce and rolled the mixture in two of my pancakes. 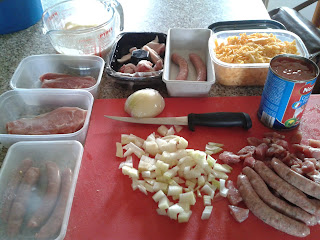 I then fried 2 sausage and  some chopped bacon from my bacon bits. I cut each sausage into 5 pieces and then added half an onion and a carrot chopped. When these were just about cooked I added three quarters of a tin of chopped tomatoes, half a pint of stock, salt, pepper, garlic granules and a pinch of chilli powder. I returned this to the heat, covered it and cooked it slowly for an hour.
The fat that I had trimmed off the bacon pieces I put aside to render for the evening meal.

Lunch was an egg cob, made with salad cream  ( there was a small amount of egg mixture left which I put in the fridge ) with carrot sticks as a side.

Tonight I have rendered the bacon fat, poured most of the fat off into a tin, into which I have put two sausage and into the oven with the batter mix poured over, on a high temp. I have boiled and mashed two large potatoes and some cabbage and made gravy with the veg juices.
So tonight's dinner was toad in the hole, mashed potato, cabbage and gravy
Into a bowl went the extra potato, cabbage and the last of the onion, chopped. This is now in the fridge with the last of the tomato, grated cheese and a portion of sausage and bacon casserole 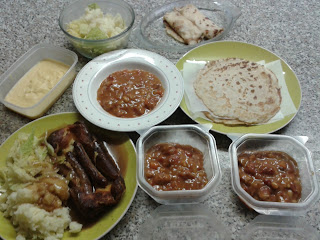 In the freezer - 2 thick bacon steaks
4 sausage
4 pancakes
2 cheese and onion pancakes
2 servings of sausage and bacon casserole
1 Portion of Cheese sauce
I don't intend to give a blow by blow account of my kitchen doings everyday. I think an update of my challenge every three days will suffice, otherwise you will all lose the will to live!

Just back from an interesting talk, organised by the Canal Society of which we are members, so this blog is a little late tonight.
Will post tomorrow with some more random stuff ( I promise you no cooking)
Good Night All
Gill

Posted by Frugal in Derbyshire at 22:29