Hello All
Welcome to Rose and Sam on the follower bar and Julie on blog lovin. Do join in the conversations and discussions (which can get rather interesting at times as my followers are interesting people!)

Usually we let the hens our of the orchard when the gardens are finished for the summer. We empty the greenhouse and leave it open for the chickens to use a clubhouse, where they gather to dustbath and have a bit of a chin wag, especially when it rains. In the gardens, we pull up the old plants, give it a bit of a weed, firm up the netting over the brassicas and then throw compost, muck and grass cuttings over the lot and let the hens out . They scratch about and aireate the grass cutting, eating the slug eggs and other critters while activating  the compost with their droppings. This is a time that we look forward to and is part of the cycle of our smallholding. However, this year the gardens are still producing and chickens don't carry little books identifying the difference between veggies and weeds.
The greenhouse is still producing tomatoes, peppers and cucumbers  and in the garden we still have beetroot, courgettes, corn salad, lettuce, celeriac, beans and squash as well as the winter crops of parsnips, leeks, cabbage, brussels and kale which we expect to cover against the chickens.

Last week I cooked a bacon joint in the slow cooker. it wasn't at all salty so I used the cooking liquid to make a lentil soup. I had made a large ratatouille too. this weekend I blitzted the remainder of this and added it to the remainder of the lentil soup and have frozen the result in individual servings in plastic pint glasses. EGD has already taken a couple away for her and her boyfriend's lunch today. 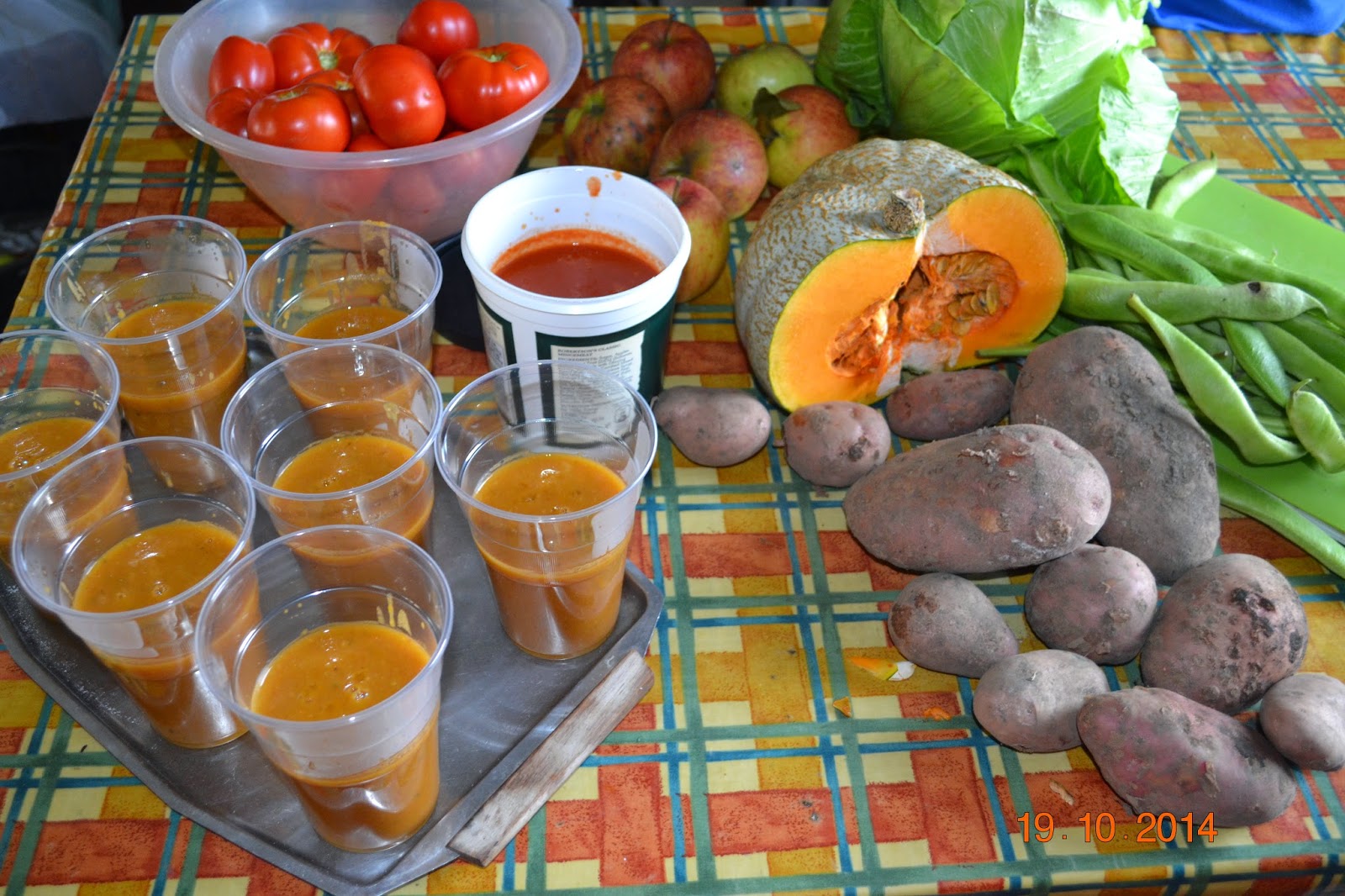 One thing our chickens hate as much as rain is wind (it ruffles their feathers). and it looks like we are in for some doesn't it? The tail end of Hurricane Gonzalo is on it's way to us and should reach us as high winds.We always have candles and torches throughout the house and I just checked they were where we could find them as we can lose power around here when we get high winds
D. has been clearing the barn gutters out today. Last time there was rain the ones facing the house overflowed, so up the ladder he went and found that the gutters  had been distorted by the wisteria. So a pruning job was needed and then the bracket thingys had to be adjusted. While he was having a "barny " time he checked the drains that go under the barn. All is now sorted in this corner of the smallholding and ready for winter. He will check on the other areas tomorrow.
Another job that needed doing with some urgency before any winds arrived was to move the swarm that we had we had collected and hived on the woodshed roof. We thought it might just be caught by a gust and dislodged. As we were going over to see our friends last night we planned to take it down from the roof, take it with us to our friends (four miles away) and leave  it there for a few days, returning it back to ours in the position we have made ready for it with our other hives. The hive was very heavy and it started to rain as we set up, but we persevered and got the job done. Here is a picture of the day we housed the swarm (July) Image the scene last night in the dark and the rain. D. up the ladder and me standing behind the smaller hive ready to receive the hive from him. 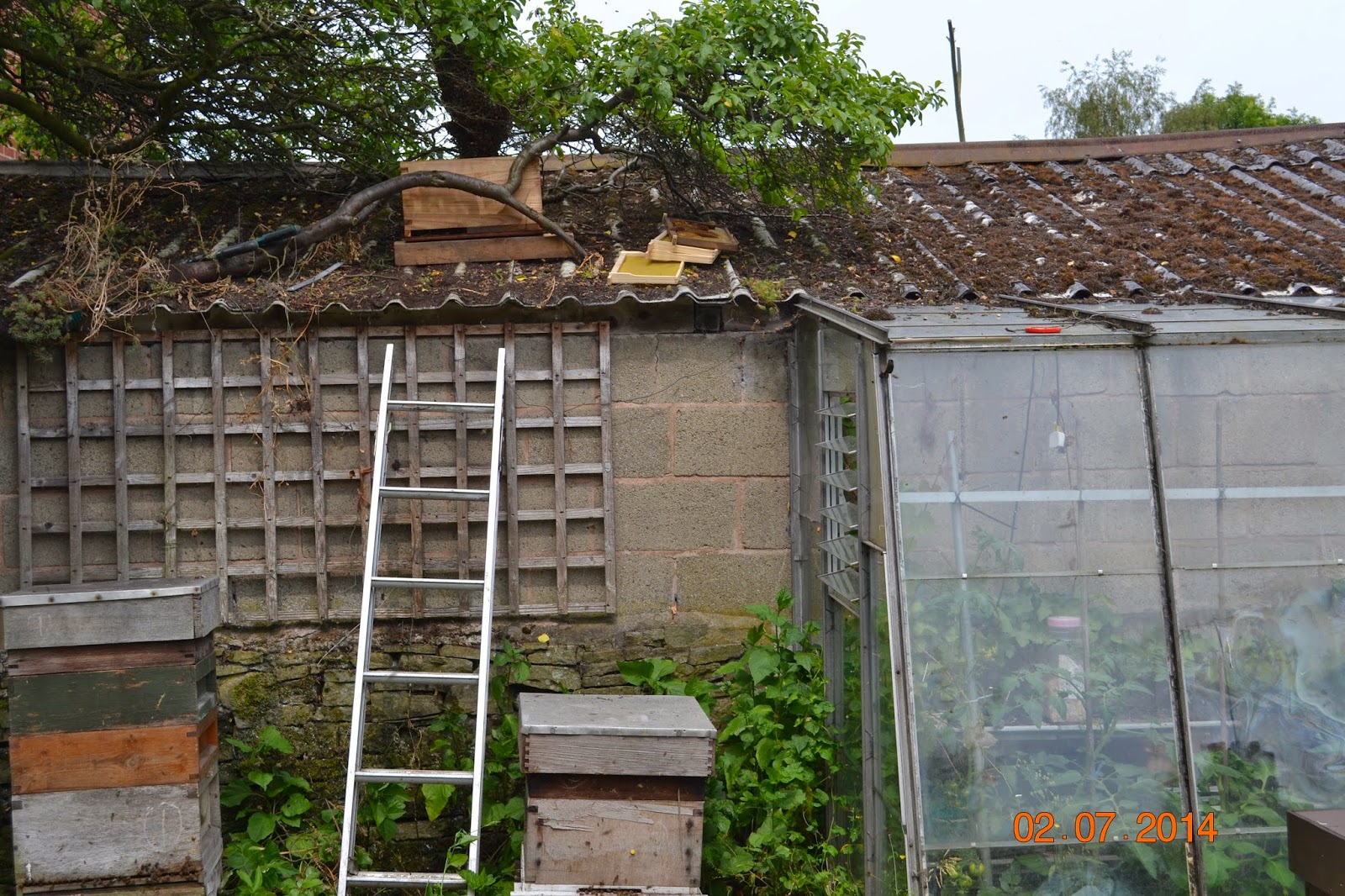 Adam has been here his weekend and was in seventh heaven. Firstly  D. was cutting  and splitting some seasoned wood in the pile down the paddock and it needed ferrying to the house. Adam loves using the wheelbarrow so he has been barrowing  logs up the paddock and stacking them against the
alcove outside the lounge door. He didn't make too bad a job of stacking either. I only needed to tweak the position of a few logs when he wasn't looking.
Next , I fetched some cement from B&Q  and he was there at the car with the sacktruck before I was parked up, waiting to ferry the bags into the shed.
The girls were here for tea yesterday. YGD was very excited as she had a present for me.... A huge bag of mushrooms! They were growing in a field at the stables where she keeps her pony and she and her mother had spent half an hour picking. Apparently they had not made a dent in the crop which was mammoth. Here is the mushroom party sorting out the bounty. Adam looks a little bemused doesn't he? 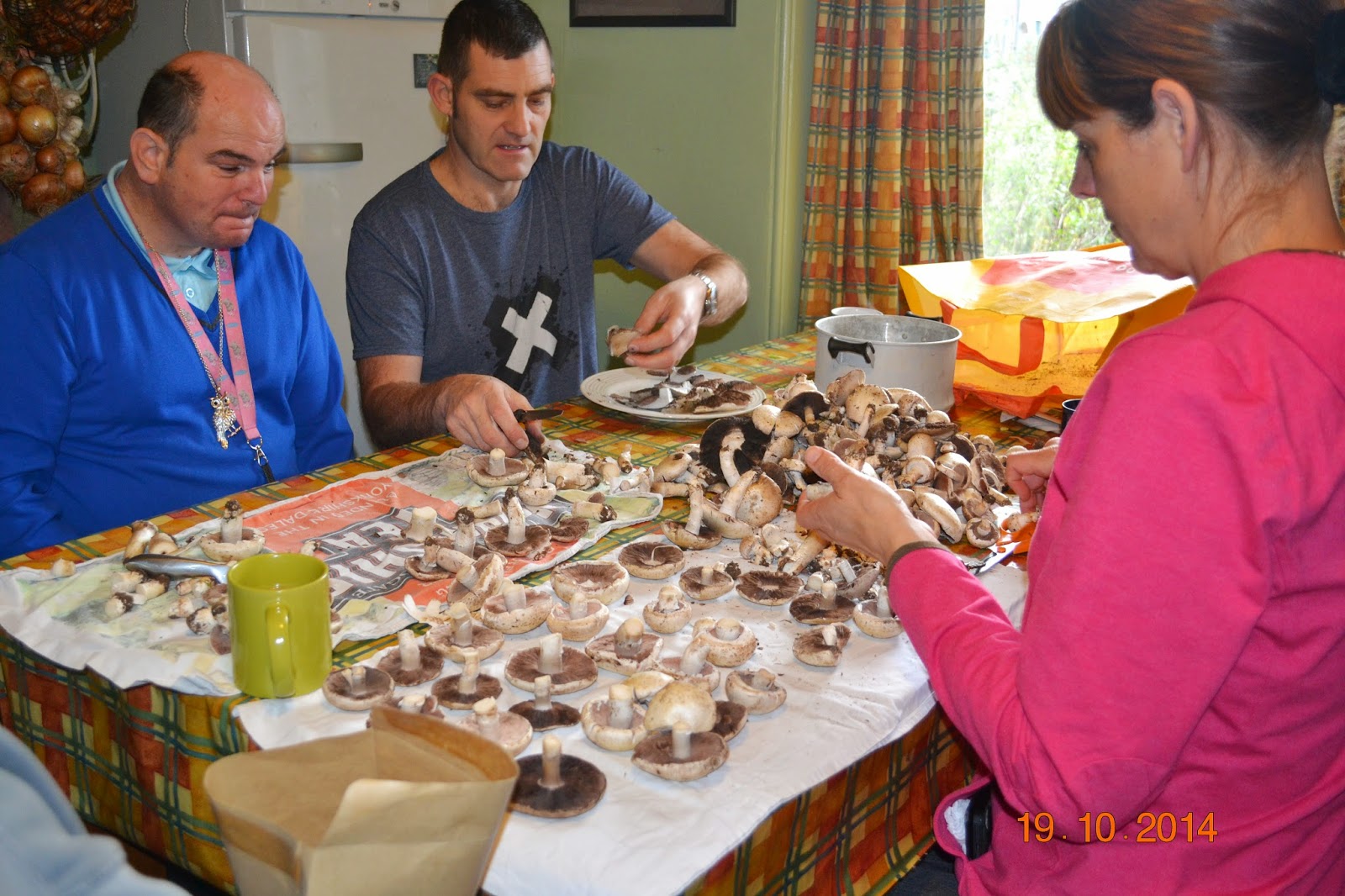 We fried the really open ones and steamed the less open ones and put them all down  in the freezer. The just opened ones we have put on racks to dry and the button ones I have put in a paper  bag in the fridge to eat during the week. I'm not a great fan of mushrooms but can eat then when they are included in dishes like lasagna, D. on the other hand loves them in any way and out Eldest Granddaughter is a fan too, so they are very welcome.
I made the baked apples that I mentioned couple of posts ago for pud.
Method.
With help from YGD I made a pound of shortcrust pastry and put in the fridge. We peeled and cored 8 large Jonogold apples
We then made a mixture of currants, sultanas cherries and brown sugar,  and a mixture of chopped hazel nuts and honey. We rolled out the pastry and cut eight circles round around a side plate and placed an apple in the middle of each round,  We put the fillings in the hole with a knob of butter on top and gathered the pastry up around the apple. We then turned the apples over so that the join was underneath and placed them on a floured dish . YGD cut a couple of leaves for each apple from the pastry scraps and placed these on top and sprinkled a little brown sugar on top.   They turned out very well and we served them with custard.
Enough for now. Bit of a random post today.
Back soon
Keep safe all
Gillx
Posted by Frugal in Derbyshire at 10:47