Hello Blogland Friends
I will attempt to proof read this post as the last one was rubbish with a round-about title!

Like all Frugellers I am looking towards a new year as an opportunity/excuse to make even more lists and challenges. We could do it at any time couldn't we? but it's not quite the same. I hope to have my list ready for tomorrow. If I do I will share it with you - whether you are interested or not!

This week I have been processing and using up the Christmas leftovers. Why can I still not bring myself to write Xmas? My strong protestant upbringing forbids it, even now I haven't any faith. Just typing it then made me look over my shoulder - what am I expecting to see/happen ? Will I be struck down by a thunderbolt,? Will my mother appear as the ghost of Christmas past? (Actually, I would LOVE my mother to appear in any form ) I'm not a superstitious sort of person so what the heck am I worried about?!
Back to the leftovers - In the freezer and to be used in the next two weeks (while I am not going to the shops) are cheese and ham pancakes. roast pork with stuffing x several servings, cheese and vegetable pie, ham and pea soup, bubble and squeak, garlic bread,  turkey pie (for Adam) and turkey soup.
Tonight we are having Brie parcels with Jacket potatoes, coleslaw and pickles. I bought some Brie for the cheese board and then was given a whole one as a present. Oh Yes!!!
To make Brie parcels - Cut the Brie into wedges. put a heaped teaspoon of pickle or chutney on top. Wrap the whole in filo pastry, gathering at the top. Bake in a hottish oven until golden. Done!
The filo pastry was from the chiller and had 12 sheets. So I cut the Brie into twelve pieces. I did half with Glutney Chutney and half with the red onion chutney made by EGD and one of the goodies in the hamper she made for each household who were at ours on Christmas day. As there were actually 13 sheets I used a piece of the brie I bought to make an extra one. Four pieces will go in the oven for tonight's tea and I have frozen the rest.
I've just changed my mind about what to serve with them as I have found a carton of yoghurt so I will make soda bread instead of jacket potatoes.
before..... 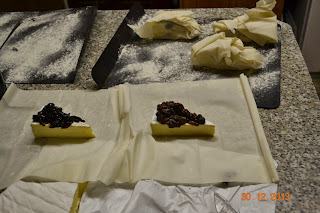 And after....... only just remembered to take a picture 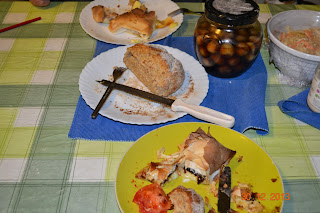 I had many presents this year, all pretty awesome. I have taken photos of frugal or home made ones as befits this blog. It would take too much space to itemise or photograph everything. Honest! I don't know why, but I have been overwhelmed.
A dear friend, who always provides the turkey for Christmas dinner.(Who, you may remember if you read a previous post, is usually named Lucky, apart from last year when he was named Willy- the turkey that is- not my friend) always buys me something from a charity shop and wraps it in newspaper while I make him something. This year he bought me three books from Help the Aged and corkers they are too.
Here is a picture of said books. Dixie got in on the act, but you can't have too many pictures of her, so I don't mind. 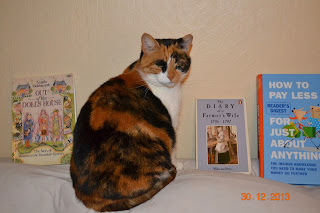 "Out of the Doll's House" by Angela Holdsworth is the story of 20th century women; "The Dairy of a Farmer's Wife 1796 -1797 " is a cracking read and great insight into the times and the third is a great frugal read. I have picked up one tip from it already which I will incorporate into my shopping list tips.
The next pic is of a hanging made for me by my god-daughter. the colours match my kitchen and it is already hung there.. I love it! 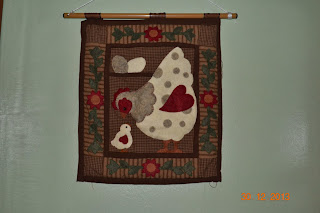 Below is a couple of pictures of the gift I made for my Godson. He is a real country boy and earns his living chopping down trees, managing gardens and any odd jobs that someone might need doing. He is never without work as you can imagine. He would also love to have a smallholding and grows or catches as much as he can himself in his small garden and some of his parents garden. He keeps bees and rabbits and ferrets.
I have covered over his name in case he doesn't want anyone to know he has anything to do with me! ha ha .In the file, in poly pockets (recycled) I have put a smallholders poem, a free preserve making book, from a newspaper, a jam muslin, a cider muslin, some bee records sheets from the internet, the starter recipe and some yeast for a "Herman" cake ( he lost his and has missed it)  a sheet of 1970s "homemade" labels, a bee cloth (for covering frames when the quilt is off) and a bee keeping apron that I made with some fabric he had given me in case I could use it. I embroidered a bee on one of the pockets and he doesn't think it is the least bit "Nancy" 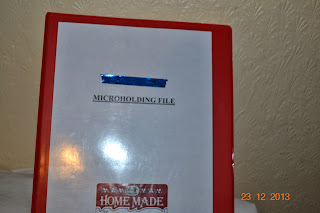 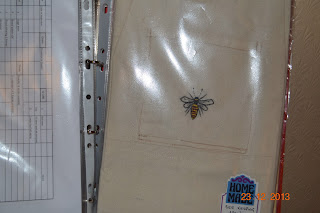 I'll put up a couple of pics of some other presents I have made soon if you are interested.

Having put the leftovers in the freezer I realised that I was just about filling it and in a fortnight's time I will have two whole lambs back from the butcher and no space for them. What on earth was filling the freezer? Diving half way down I came across a HUGE bag of grapes, then several bags of elderberries, then plums and damsons and finally a large bag of blackberries. These were put down at a busy harvest time to process later and then forgotten. So this afternoon I have started making several gallons of wine and some cordials. Wasn't really on my list of jobs but hey ho. I'll be glad I did it.
I shall get down to some paperwork now in an attempt to start off the New Year in as organised a way as possible...for me.. .I'm no frugal Queen believe me!
That's all for now
Oh yes, the choice of names for the female Lucky was Luckina or Luckette. We opted for the french version and ignored the suggestion of Fanny.
Gillx