A raffle prize and a finished present

Back in Blogland at last!
Firstly welcome new bloglovin followers ..Wendy, Julie and Hazel.
Have been taking things just a little easier this week, while getting all sorts of stuff done too.
Last Sunday I went to the Local Food Event at Belper with my youngest daughter, her daughter and her boyfriend. The main street was thronged, as were a couple of side streets. What a huge number of stalls and a good turnout of buyers too. I was interested to see the stalls of the local community groups. It is always heartening to see local people getting involved in improving the quality of life for themselves and others. I signed a petition about the National Health Service and had an interesting chat with those running the "Transitions Belper" scheme, which takes an interest in, amongst other things,  green initiatives, recycling and community gardening. While I can't commit to giving time to the scheme (though I wish I could) I did offer spare plants and seeds if they would be of use. They had a free raffle, the entrance "fee" being that you wrote an idea for a way to improve the lot of people in the town on a card which was posted into a box. The cards to be drawn the next day.  I had a phone call.. And guess what? My card was drawn and I won the prize, a hamper!! I went to collect it yesterday and it though some of it was a just a little "Coals to Newcastle" it was  non the less welcome. The lovely sturdy rush basket was full of fresh locally grown veg and bramley apples, a jar of raspberry jam, some locally ground flour ( ground in a real windmill no less) with an accompanying recipe book and and a bottle of white wine...good eh? I was determined to make the most of the bounty, so today I boiled the beetroot, made a huge leek and potato soup, processed and froze the apples (with help from a friend who had called in) and cooked some more of the potatoes to have with tonight's dinner. I Bought some yoghurt to make some soda bread tomorrow to go with the soup (Cro's recipe)
D. said he would come with me shopping this evening, so off we set for Sainsburys and bought some "iron rations". I also needed to get some unsalted butter for the lemon curd EGD and I are to make tomorrow. We got home and started to unpack the car and I realised that I hadn't got my bag !! I had left it in the trolley in the car park ...eeek! So I ran into the house and grabbed my passport and driving license and we sped back to the shop. No bag in the trolleys, so ran into the shop and asked at customer services if a bag had been brought in ? Yes, there had and could I describe it ?... yes  I could and here was my proof of identity. Thank goodness. I am now reunited with my beautiful bag that I have had for many, many years and the contents thereof. I am not able to thank the person who gave it in, but am extremely grateful for their honesty.

I have been working on Christmas presents again this week and at last there is one I can show you as it is for my grand nephew, who is only two and a half and doesn't read this blog... really.
I found the pattern in an old pattern book (circa 70s) in a charity shop and am really amused by how it has turned out.. what a character. Ladies and Gentleman.... meet Gerald! ... 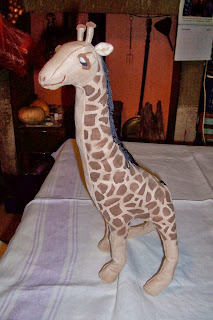 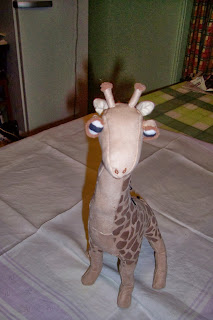 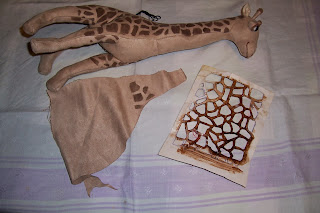 The last picture demonstrates how I painted the giraffe markings on the "suedette" fabric that was in a large bag of material given me by a friend. I can just imagine little Marius with Gerald tucked under his arm, as that neck is made for the job.
Going to sit and watch a spot of television now while I do some hand sewing (another present) There is a new series on Pilgrimages which could be good.
Goodnight dear Frugal brothers and sisters. Many thanks for your good wishes
Gillx
Posted by Frugal in Derbyshire at 21:42