Hello Frugal Friends
I've just dropped D. and a friend off at the train station ( one mile away) They are off to the Beer Festival at the Roundhouse in Derby. This venue (where trains were turned on a huge turntable) is actually adjacent to the train station and a wonderful venue it is too. I remember as a child visiting the "Loco Works" open day  with my best friend, whose father worked in the workshops there. The turntable was working then. Later on, as an art student, I visited the Roundhouse (by now an empty, dusty building) to sketch the interesting shapes made by the beams in the ceiling. Now it is an annex for Derby College and a venue for all manner of things.
In truth, Derby is not known for keeping it's treasures and is known by some as "Knock-it-Down Derby".   Recently, a Lowry has been bought up from the bowels of Derby museum and art gallery. It has been there since the 1946. I was born in Derby the same year, to a father who painted, went to Art College in Derby and regularly visited the Museum and Art Gallery from childhood and I had no idea we had a Lowry and a good one at that!  Apparently the painting  is one of many paintings by diverse artists, languishing in the archives. There is not room to show them all. So what to do?! I bet you know what I'm going to say next ! Yes, some people want Derby to sell the Lowry, which is worth an estimated £1 million. We could do with the money for all sorts of things,  people are starving,  care homes are closing, public buildings need renovating. There are many, many reasons to sell the painting. HOWEVER...Once the money is used it is gone and in public services one million pounds would be swallowed up in seconds! Why can't we use it to generate money?. Why can't we rotate the paintings that we have so that we can enjoy them all at at new exhibitions, which will attract more people to the city ? Why can't the painting be shown, in turns, at the museums in the smaller towns in Derbyshire, giving them a boost?
Agree or disagree ? Can we afford the "luxury" of paintings when services are stretched and the money could be used elsewhere?
Here it is..... 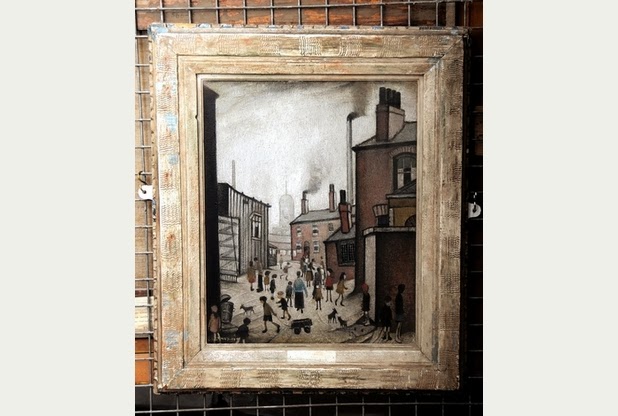 It was our wedding anniversary on Thursday.... 48 years! Do you think we might make ago at it? Time will tell I am sure!

All for now. Off to bake a cake or two to feed some volunteers who are coming to work on "our" stretch of the canal tomorrow. (weather permitting!)

Welcome Jane Fearn to Blog Lovin. Hope you enjoy visiting my blog and join in when you feel like it!
Gillx


Posted by Frugal in Derbyshire at 10:06