Here is most of the shallot crop.( I wish I had weighed them )  I have used a few already.
They are now completely dry so that I could sort them. 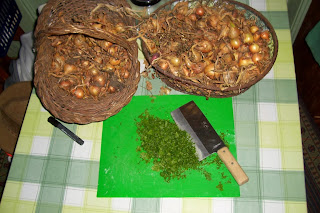 The jar, just out of the picture, is an olive jar from Lidl (or Aldi) given to me by a friend. I used it last year for the Christmas pickled onions and it was perfect, so I saved it for this year.
How I pickle onions - boring!
I peeled the shallots and packed them into the jar, sprinkling salt over each layer as I did so.
I then boiled up some malt viengar with a couple of sliced cloves of garlic, a few black peppercorns and a couple of tablespoons of honey. I put this aside to cool.
Today I poured away the resulting liquid from the shallots and washed and drained them.
I then poured the vinegar over the onions....... I told it was boring!

As you can see, in the picture below, I have sorted and tidied up the smallest shallots into the cage and made a couple of strings, which will keep well into 2014.
With the remainder I made a generous bowl of onions a la grecque. Gosh I'm posh !
This is really onions in a tomato sauce. ....
Simmer peeled shallots/onions in -
A couple of cups of white wine.( I used half red wine and apple juice, as that is what I had!)
half a cup of tomato puree (home made)
a couple of tablespoons of sugar.
a bay leaf.
The classic recipe calls for juniper berries, which I believe should only be used in gin!
After  approx 20 minutes take the onions out of the liquor
Reduce the liquor by half and then return the onions. You can now add fresh basil if you like.
I don't need this immediately , which is okay because it freezes well.
If I were you I would keep tasting the liquor and adjust to suit.
So ( I've got to say it!) That's Shallot!! 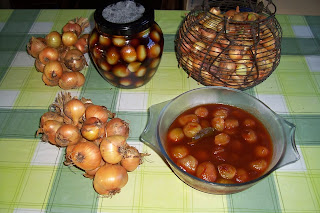 Yesterday, after posting some more Civic Society Newsletters I set to work on the garden as it had stopped raining and the sun was shining.
I covered in netting - The leeks, the silver beet, the perpetual spinach, the beetroot and the last of the marrows and squashes. In the paddock garden the brassicas are already covered in netting.
So today I have let all the chickens out of the orchard and they will have total free range over our two acres for the winter.
All for now Frugellers
Gillx


Posted by Frugal in Derbyshire at 10:24