Well our loins are girded and we are well stocked up with the ubiquitous Kendal Mint cake! (or chocolate if you are Simplesuffolksmallholder)
Over the last fortnight we have had two power cuts of a minute or so and one of 55mins. Does this mean that we have had our share of power cuts, or that our power system is a bit fragile?! The next 24 hours will test it I reckon, with a storm forecast to hit us over Sunday night. The south is expected to get the full force with the Midlands (us) a little less so. Today we will walk around the smallholding, checking the drains and tying down anything that might blow away. As three of our trees have lost large branches this year (getting a bit creaky, like us!) we have an eye on the others, especially those near to buildings and greenhouses.
The poor chickens are up to their knees in mud in the orchard already, but at least they can get to the rest of the place now that the gardens are secure. What they hate more than mud is wind as it blows their feathers about. Poor things, they aren't going to be too happy are they?
Here is a picture that EGD took on friday as she arrived at the gate to the field. A goodly few of the chickens are scratting about in the paddock and beyond them you can see D. walking towards me in the distance. I am holding Suzie the sheep who was kicking at her sides, a sure sign of fly-strike. fly-strike is where a fly lays eggs deep in the wool of the sheep, which hatch into maggots, which in turn eat into the sheep's flesh.. Yes I KNOW! it's disgusting and upsetting. We cut away the wool around the infestation and scraped away the maggots (which incidently the chickens love) onto the ground. We then treated the area, which is quite sore as you can imagine.. We will keep checking on them to ensure that they are clear. We have kept sheep for over thirty years and have never had to worry about strike in late October before, but the weather is warm and wet, which are ideal conditions I suppose. 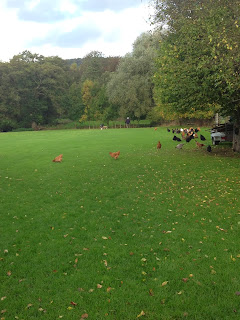 Some of the family will be here for tea today. I have bought a couple of chickens,, which is much more than we will need, I have also done copious amounts of veg - but I have plans for the leftovers..of course!
Two large apple cakes, using maggotty - less the maggots -eaters are now in the oven as I have started baking for the Discovery Days Exhibition presented by our Society next Saturday and Sunday and a dedication service and social, hosted by us on the following Thursday. I made a huge Ginger cake yesterday  and will probably start on the Carrot cakes tomorrow ( a great favourite).
I was wondering about making a gluten free cake as half the world seems to be gluten intolerant at the moment. Has anyone any good recipes to share?
So many people have intolerances nowadays that that  I wonder what is behind it all. As an organic grower and beekeeper I have my suspicions, but something has surely changed.. When I, and indeed and my children, were at school I never heard of a single child who was allergic to nuts and the child who had asthma was rare. In fact when I was at school a child with asthma was likely to go to a special school for delicate children. My understanding is that now many children have inhalers that they take to school. For a staple, like wheat, which has fed this and every nation for thousands of years, to make people ill is a cause for great concern.
It surely isn't enough for us just to change our diets..Are we asking the powers that be what is being done? Why have people who have enjoyed the usual diet of our country suddenly become intolerant of something that forms a major part of that diet?
Rant over.
Off to draw a map for the exhibition now. it is a huge one of the villages that our society covers and it is mounted on ply from solar panel packing  -  of course!
Gillx

Posted by Frugal in Derbyshire at 13:38