Good growing weather ! sunshine, warmth, thunderstorms and rain. I don't understand how the weeds grow quicker than the vegetables, but that seems to be the way!
Produce starting to come in thick and fast now, which means time to start 1) Selling some 2) Eating some and 3) preserving some for leaner times. So, the signs are out, the jars are out for pickling and there is room in the freezer for any glut, after us living out of the cupboards and freezer over the last two weeks.
We still have broody hens all over the place. Tree house hen bought off two chicks and then left the rest of the eggs up in the tree house. I went to clear them away and found one was chipped, even though it was stone cold, there was some movement to be seen. The shell was VERY thick as was the membrane and the poor little mite had no chance of getting out. So D. did some careful peeling (not really advised but the poor little blighter was going to die anyway) and with the aid of a hair dryer and his cupped hands, helped it perk up a bit. It was so cold, goodness knows how long it had been trying to be born. It is now in the incubator all on its own. Unfortunately, it doesn't seem too steady on its feet and can oldy walk backwards with any ease,. If it can walk properly I shall sneak it under a white hen that has been sitting well over  her time, but won't get off the obviously infertile eggs. Yesterday afternoon when she heard treehouse hen's new chicks she raced out of the goat house to try to steal them. TH hen duffed her up for her cheek and she swiftly went back to her eggs. Soooo watch this space.
Here is a picture of TH Hen with her chicks. 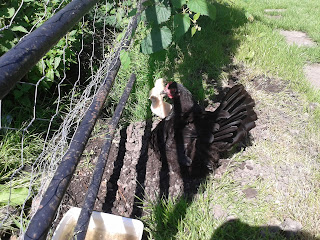 And here is Manny-mummy with her three older chicks, who have found their way into the greenhouse and are on  the look out for tomatoes!! I wish ! I was very late planting this year. (notice I grow basil and french marigolds too in the greenhouse. I believe it deters whitefly and flies away.) 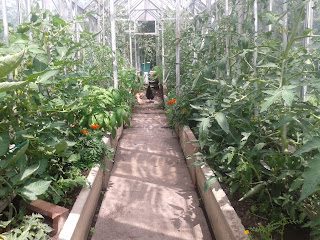 I wrote that first couple of paragraphs this morning. It is now after lunch (Pilchards on toast) and here  is an update on disabled chick... it isn't!!! I opened the incubator and it jumped out and raced across the working surface. I only just managed to catch it before it threw itself off the surface and onto the floor - now that would have been ironic after all it has gone through, for it to have leaped to it's death ! So I went into the goat house and put  clean extra bedding mixed with some herbs under white hen and while I was doing this I stole her eggs. I then ran to the house and picked up chicky, which I sneaked under the hen. It promptly cheeped very loudly and pushed it's way out. WH firmly pushed it back under her and swore ( no lady) at me. Job done !
Post script. JUST as I had put the eggs from under WH in a bag, one of them exploded !! I was lucky there, the smell is horrendous and if you get the yuk on you it stays for days.
I put a couple of bunches of flowers outside this morning at £2 per bunch. also put out beetroot, cabbage, herbs and rhubarb. I set off to cut some chard to go with this lot and thought "when I get back I will take a picture of the flowers for my blog" As I got back to the gate a woman is standing there with the flowers and her £4. She then asked how to cook the chard and bought that too. So I don't have a picture to go on here
but I have made a sale!
Out tonight to see our Grandson, who is 21 today. He is working at a small olde pub in an olde village. (you get the idea - genuinely so, few improvements made and real ale sold) he doesn't mind working on his birthday as he needs the money. They will be busy today as it is the day of the village's Hen Race and tonight there will be a group playing, though goodness knows where they put them as the pub seats less than 30!
Off to Aldi now. Both daughters will be here tomorrow for tea and D. has asked for a chicken dinner (good leftovers from chicken dinners ) This evening D. and I will have left over cheese onion and potato pie with the cabbage and bacon thingy recipe I found earlier this week.
That's all for now, must shop!!!
A warm welcome to Lesley, thank you so much for reading my blog
Gillx
Posted by Frugal in Derbyshire at 13:43