Entertainment at our frugal Party II

That's Entertainment !!(sing along everyone!)
SO, as promised, this is what we do for entertainment at our big bash. It's fair to say that the word sophistication doesn't come into it, just good rollicking fun and games. Providing some sort of entertainment actually saves you money. How many parties have you been to and have spent most of the time grazing the buffet? Lots I bet! If there are things going on people leave the buffet table to either watch or take part I promise you.
At our "Do" we do games/ races for the children and increasingly for the adults too. Each year we seem to add a different race and upscale it for the (supposedly) grown ups. This year the races were egg (potato) and spoon, wheelbarrow, three-legged (child with adult) sack race and obstacle. Now that doesn't sound a lot but when we have several age groups and then heats and then finals it's plenty! And (whisper this) if you come first you are the ....Winner ! Oh yes! Call us old fashioned, but you actually get a sticker of your choice to wear if you win. ALL competetors get a dip in a sweet assortment ( £2.99 from the cash and carry)
Throughout the day one of my nephews, who has some Disco and microphone stuff (can't remember what you call it!) acts as compere with help from ED.
Here are a few pics of children and grown ups doing their best to be the first across the finishing line. 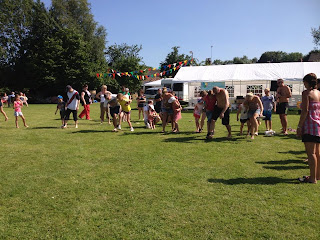 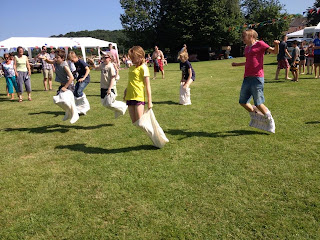 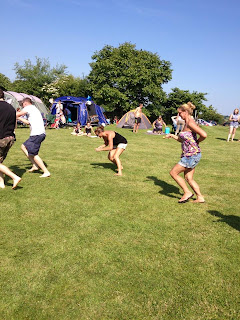 Looks like the three legged, Sack race, when one boy broke his toe and his mother didn't sue us!! and the fiercely fought adult potato and spoon race.
The Dad's obstacle race was the highlight of the afternoon. I am constantly amazed at how people are happy to make complete tw**s of themselves just to get a sticker. This race had to be in three heats because of the number of dads that wanted to take part. Now I understand the first lot doing it, but the second and third lot KNEW what they were letting themselves in for. The Milkmaid's Obstacle Race was as follows...
Now I think you will agree that we have now reached new heights of sophistication. I will post a picture as soon as I get one.

After the races it's time for any child that wants to do a turn to take to the stage. This is not a competition, just a chance to show off really... and why not?
Here are a group of 7/8 year olds singing and dancing 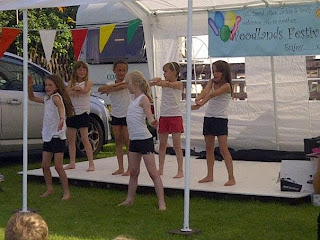 And what better way to cool off on what was a very hot day that a dip in the river ? 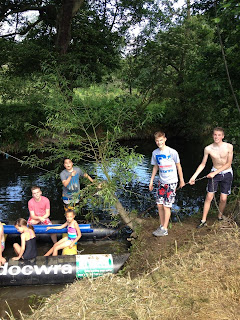 After a break to replenish drinks etc it was time for ZUMBA !!! 70-80 men, women and children had a go at this. ( I watched.... and that Kn******d me!)
Then, as happens every year, my nephew and his friend, who used to actually do it for money, get together again to play songs we all know and love to sing a along to. We gather our chairs around the "stage" and sing and dance until midnight. As children fall asleep they are rolled into tents.
At midnight the music stops and the bonfire is lit at the bottom of the field away from houses and those who haven't crashed out already gather around the fire just to talk and chill. Perfect Day!!!
So there you are, Our entertainment for 200 people from 2o'clock until midnight that cost us £2.99 (sweets) and £6 for buckets.
You have probably read enough by now and need to lie down an a darkened room!

Had a busy day today, sorting bees. We have had two large swarms this week and are running out of equipment to house them. So D. has been cobbling hive parts together while I have been getting frames of wax foundation ready for the little darlings.
Apart from tree house mummy, all hens and chicks are now in the Orchard.. Hurrah! Life will be so much easier.
After saying that we have had hardly any butterflies this year, we have been inundated with Cabbage Whites today.. Stand by your Brassicas Gill!
D. Has just come in from dispatching a wasp's nest that was in the boiler room of the village hall. I think he is mad to do it as, though he has all the beekeeping gear, he is allergic to wasp stings and goes into anaphalactic (is that how you spell it?) shock if stung by a wasp (not bees) We keep adrenalin in, but even so....
Good night dear blogging friends. I'm so glad to be back in blogland reading how you are all getting on
Gillx

Posted by Frugal in Derbyshire at 23:44