Sea Fishing... What I did with the catch


D and I travelled down to Cornwall on friday so that D could go sea fishing from |Looe with friends. We are now home so the first "Great Fish Processing " of 2013 starts!
The first picture (below) is of the catch. To the front are two pollacks, the large one weighing 5lbs. On the two large trays behind is the Ling catch, with the largest weighing 10lb
I thought you might be interested in what I did with the catch. 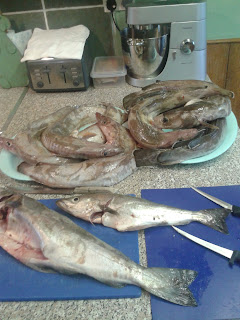 I filleted and skinned  all the fish ( you can't see the pollack in this pic as it is already in the freezer as six fillets) and cut the majority of the ling fillets into cougon-size pieces, The fish hold together better if you cut the fillets at a diagonal, as on the cutting board. To the rear of the board are several thick fillets of ling, to your left are the offcuts which will be made into a pie. To the right are more cougons ready to be tossed in flour, 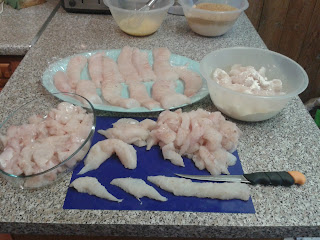 The next pic shows the process of crumbing the cougons. Starting from the fish pieces and working anti-clockwise I floured the pieces in plain flour with a pinch of salt and pepper added ( for a bit of a bite you could also add paprika or garam masala at this stage too) Next, after shaking off any excess flour the fish is dipped in egg and milk  (again, shake off any excess) Finally the fish is rolled in crumbs and then laid on a tray that has been covered with cling film. I recommend that you use one hand for dipping in the egg and the other for rolling in the crumb, otherwise you will soon have VERY crumby fingers and need to keep washing them ! The crumbs I have used today are a mixture of breadcrumbs and cornflake crumb. You could use cornflake only or mixed with oatmeal or polenta if you are wheat intolerant, or just breadcrumbs or a mixture of all of these. Whatever appeals. 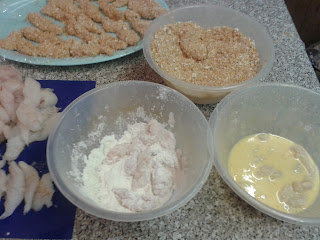 The cougons are then covered in a layer of clingfilm and put in the freezer to be open frozen. When they are completely frozen they will come off the under cling film easily to be put loose into bags so that you can take out the exact amount you need.
The final picture is of the fish ready to go into the freezer. There are 94 good size cougons here and 14 fillets, the pie will feed 4 to 6 people. Not in picture is the pollack and the fish heads and tails that I have boiled in a small amount of water to give to the chickens tomorrow.
I weighed the catch, which weighed 46lb, and realised 20lb of fish for the freezer, a pie and breakfast for the hens. 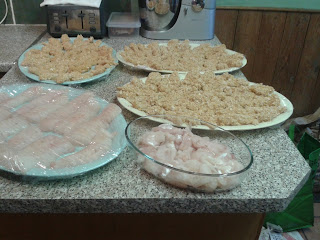 Tonight, for dinner we had toad in the hole, carrots, cauliflower cheese, cabbage and mashed potatoes. I made extra cheese sauce, potatoes and cabbage. The cheese sauce I poured over the fish pieces ( after I had microwaved them in a little milk and seasoning for 5 minutes) and then topped this with some of the extra mashed potato. The remaining potato and cabbage and a few carrots will make bubble and squeak to go with cougons tomorrow. I have frozen the pie for another day.
Bit of a serious post today eh?  I hope this has been helpful to anyone who hasn't worked with fresh fish before. This, line-caught fish is the only fish we eat, it is sustainable, which given the state of our food stocks is extremely important.
Next week I will share this fish with our elder daughter, one of the guys that fishes with D and with our godson. As this is the first fishing trip of several D will make this year, there is plenty to go round !

I'm off or a shower now and believe me... I need it!
Bye for now
Gill

Posted by Frugal in Derbyshire at 19:46