Blogging, a casserole and freecyle

Hiya ! I'm rubbish at doing this blog regulary aren't I?
My daughter says " you really need to post everyday to keep people interested and maybe get more followers too" So I gave that some thought. Is that why I started this blog, to have people read it and "collect" followers?  Well no I didn't see it that way. I had been reading blogs for some while on frugality, smallholding and make do and mend and was picking up lots of ideas. But I also knew that as a self-sufficientist smallholder of some years I had some tips of my own to share. That was why I started this blog. NOT to collect followers or see how many people would read my blog...
HOWEVER, I find myself looking at the stats (aren't they fascinating?) to see how many people have visited my blog each day. I love it that they are from all over the world and yet it's as though they are from next door. I Like to see how they found my blog.. another blogger? googling a keyword? .The info is all there and SO interesting. I also get so excited when I get a new follower and I didn't think I would.
I am surprised at how I feel I actually know someone I can't possibly know! Is that sweet, vegetarian, home schooling crafter really who she says she is? I DO hope so as I admire her. Is that self-suffficient, uber-frugal, bread making every day knitter the paragon she seems? or does she actually sit watching day-time television all day while eating crisps and drinking lager from the can? I'm sure she doesn't
And.........are those husbands really so wonderful?  (hmmm not too sure on this one!)
So yes, I should be more regular with my posts because I DO like it when people take the trouble to read and comment  - and I hope that blog friends may find any hints, tips and recipes useful  and they wont mind my burbling diary-type stuff too!
So back to the burbling diary-type stuff !!
The phone rings " Grandma, can I have your recipe for sausage casserole please?" It's EGD. I ask her when she wants it for and she wants it now, over the phone. Okaaayyy! crikey, have I got an actual recipe? Fortunately she understands the dollop of this, a tin of that and as much of that as you have got, sort of recipe. She has been given a bag full of sausages and has four rashers of bacon in her fridge.She also has carrots, onions, potatoes and tins of tomatoes and baked beans. So all she really wanted was an idea of method. So we had a bit of a chat and she felt confident to have a go. She had bought a small slow cooker herself when she was "bottom-drawing" and I was given a larger one to give to her just before she moved. Well by the time she had finished ( she and the BF went to the shops and bought a few mushrooms and a leek to go in it too) she had filled BOTH cookers! She sent me a picture on facebook of them before cooking and here it is below.... 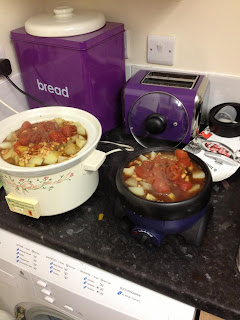 Several hours later, they had put several servings down in the freezer for easy meals to come home to after work. They bought a generous serving for us to try on sunday when they came for tea..( we had Toad in the hole) and very nice it was too - the casserole that is!
I am always being given jars for my jam and chutney making. Sometimes I get a bit overwhelmed by them ! Last week I found myself wondering if I ought to put some in the recycling bin to make some room. Then I remembered the times I have been desperate for a few jars and so on monday I put them on freecycle. I'm so glad I did. They have been snapped up! One young woman said she hoped to make chutney with her courgette surplus. She told me that she had fetched some fruit bushes from me last year and that she had so enjoyed growing them that this year she has branched into veg! We had a great chat about chutney and cooking and  sewing. Another young man will pick up the remainder tomorrow and says he will bring me a bag of plums in exchange.
I realised that I haven't recorded my egg totals (well SOME people are interested!) So I must do that.

We are going away this weekend for a week to Cornwall with ED,YGD, SiL and his Mother. YD YET AGAIN will be looking after the place. She'll pack up her stuff and Foster Dog and decamp to ours, bless her. ED will have her little laptop thingy (I can't remember what it is called) so I may be able to do a crafty blog during the week.
Today I found out the crabbing bucket and lines for YGD. These were once used by the older grandchildren and are still going strong. You just HAVE to go crabbing off the harbour wall when you are eight years old!
All for now
Back soon
Honest!!
Gillxx

Posted by Frugal in Derbyshire at 23:45