Hello All
And a special welcome to Fran. I see you are well into boats Fran. We are involved in canal restoration and of course, D. spends as much time as possible fishing on the briny, so we will have things in common I am sure ( as well as frugaldom!)
So, what have I/we been up to? well, it has mostly been gardening...looking after animals...processing stuff from the garden... more animal care...more gardening!
Have just started cooking another batch of glutney chutney in the slow cooker. This one has peppers in it and less tomatoes, using the same principle as before.
I have also started stoning some plums for a mixed plum jam. Pic. of the plums below (6lb). They look like a plate of jewels don't they?
They are - Victoria; Czar; Margories seeding and Cambridge Gage. The Greengage gives a special, fragrant dimension to the jam. The recipe is...
6lb Plums, 6lb Sugar, a pint of water. If you don't have a large preserving pan, just scale down the amounts to fit
It is probably the easiest jam of all to make. Put the sugar in an oven-proof bowl in a warm oven, alongside the jars you will be using. Stone the fruit (some people then crack a few stones and put them in a muslin bag in the jam while it cooks. I don't) Cook the fruit in the water for about half an hour until the fruit is soft. Add the warmed sugar and when this has dissolved boil the jam vigorously until setting point is reached. Pot into the warm jars. 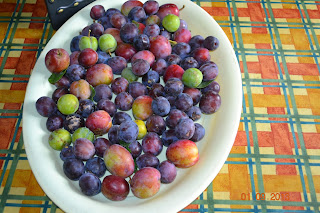 I LOVE PLUMS! rest assured there are plenty left for me to eat. I prefer them to all other fruit, but the season isn't very long and they don't keep, so I have to make the most of them.
Another crop that has done well this year is the hop "Fuggle". This has fallen down from its tall pole and is languishing along the paddock gate. I think it looks quite well there. So if anyone need any hops. I have PLENTY. 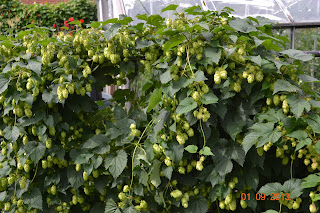 I guess no-one out there in Frugal land has grown Strawberry Spinach as no-one came back with ideas as to what else to do with it!
Tonight meal was entirely home grown, with all the potatoes, veg and lamb produced here. What a wonderful feeling that is!
Off to the shower now before we go out to meet up with friends for the evening.
Was going to write a bit about a programme I saw the other night with Nigel Slater, but I guess it will wait as I am fast running out of time.
Good Night All
Gillx
Posted by Frugal in Derbyshire at 19:28