Hiya!
Anyone else with bees looking out the window wondering if they will swarm?! The bees have all made it through a mild winter and the colonies are strong. Because of the heat most hives have lots of bees "bearding" to the out side of the hive to keep themselves and the hive cool. On first sight it is difficult to assess if they are about to swarm, so I keep looking to see what they will do next. We had one swarm last week and it was a whopper! It settled low in a pyracanth so was easy to collect though the nasty thorns kept catching at my veil. When boxed it almost filled all the frames, so it is more than possible that we will get honey from it later in the year. 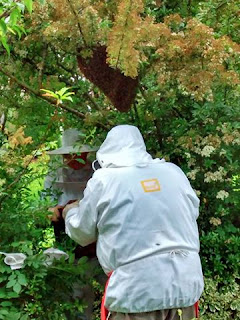 Our godson who also keeps bees has had several swarms from the hives in his and his parent's gardens (they live next door to each other) Unfortunately, his father was stung last week and had a serious reaction that the doctor says will only get worse with any further stings! So Gds has to look to rehome his bees. he will have to sell some bees and just keep half a dozen hives in whatever plot he finds to house them. So if anyone in Notts/Derbys is looking to buy some bees let me know and I will see that you are contacted.
Looking out of the window I do believe I see bees pouring out of hive No 5.. must go!
Gillx
Yup. sat at the door for 10 mins to see them landing in one of the damsons. They have settled on several branches at the mo, so will look again in a few minutes to see if they have amalgamated into one lump and where in the tree that might be. I hope it is the lower branch!
Gx

Posted by Frugal in Derbyshire at 10:11