Hello from a wet and windy Derbyshire. The river is up and some of next doors sheep are marooned on little islands of grass where the river has burst its' banks. I shall keep and eye on them.
Thank you so much for the comments on my last post. I learnt a lot and hope some of you did too. I will round up with a quote from Aneurin Bevan
"No society can legitimately call itself civilised if a sick person is denied medical aid because of lack of means" (I hope I remembered that correctly, but you get the drift)
Update on the apple mountain.
The other day I blogged that I was on my own for the day and not expecting visitors (fat chance- saw quite a few!) One visitor was especially interesting. he knocked at the door and said that he saw I had apples for sale, wondered what kind they were and if I had any not fit for selling ? Erm yes! This guy works for a small local brewery and was wanting to have a go at making cider. We walked around the holding together looking at what we had and I agreed to fill a couple of sacks for him while I was sorting the glut/picking up windfalls. Over the next week I put different kinds of eaters (he already had plenty of cookers) in the sacks and he collected them last week leaving me with a couple of bottles of their beer. I am looking forward to trying his brew.
I finally have some cider on the way. I used 4 large bucketsful of mixed varieties and got 7 and a half litres of juice. Not too bad.. Eight trays of perfect eaters and a tray of Bramleys are now in cold store and I have a barrowful of Bramleys to process for the freezer. EGD and I made several jars of apple and honey chutney towards the Christmas hampers and our own winter stores. I have put a bucket aside for Cheeky (sheep) before they go off. The chickens have a barrowful of rubbish ones and the really awful ones are on the compost heap.
All sorted tah dah!!!
Still on a bartering/food theme. Godson arrived with some more pallets and a couple of pheasants he went away with a jar of marmalade and some fish. Just how I like to deal.
Here is EGD just starting the prep for the apple and honey chutney. It was great to have all the ingredients grown here. (Including EGD who was born in my bed!) 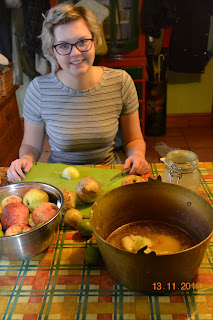 Here is Adam just starting the beans sorting. he so loves this job and I so love it being done. from 9 o'clock we have butter beans, black beans, the tray to be sorted,; Borlotti; Lazy Housewife and  Streamline. As you see there are many more Streamline than I will need for seed and we don't eat them dried so will save for the pigs. 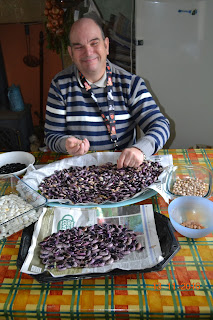 A couple of days ago before the rains came I looked into our neighbours field and saw mushrooms. I was very excited as we have had none this year. I collected a bucket and stealthily climbed over the wall to find.... turnips! the farmer had thrown several buckets out for his sheep. (not the only animals feeling sheepish)
All for now
Keep warm and safe
Gillx

Posted by Frugal in Derbyshire at 10:07