Hi Everyone
It looks like we are in for some cold weather. Not really suprising as it is November. However, after last years' warm winter it has made me think my winter thoughts! I went into the "occasional" linen drawer to find the heavy curtains that I put at the two unglazed outer doors and realised that I didn't get them out last winter, that's how warm it was.
We have plenty pallet wood and logs in for this winter and one of the Shared Lives guys has been happily chopping sticks and filling animal feed bags to the brim. He sits in the workshop, warmed by the old field kitchen which is fuelled by pallets of course, with a big chopping block in front of him , lengths of wood, cut on the bandsaw by David, on one side of him and an ever growing pile of kindling on the other. Radio Derby is playing and the kettle is continually boiling for the endless cups of tea or oxo. Our other shared lives guy is a very tidy person and loves to sweep up any sawdust or shavings which he puts in bags and takes into the barn ready for muckng out chickens or rabbits. It would be good to take a photo to go with this little cameo, but their privacy is paramount.
I was wondering if any old people in the village might need some help or support this winter, perhaps with a bit of shopping or offering to share a warm meal or just popping in to see if they were okay. I was then reminded that we ARE the old people of the village....really?!.. when did that happen?!

I'm gradually putting produce into store. It has been a pretty good year in the garden, with the exception of the beetroot and peas which have been very poor. I'm still picking tomatoes, which is unusual for November. The marrows have been exceptional, with many huge marrows from one plant. There are only so many marrows a family can eat so I collected a few together to put into store for a while until I can face them again. I piled them against barn wall one day and the next day this is what I found. Vermin came to mind obviously and I cursed myself for being so lackadaisical and leaving food out for them. 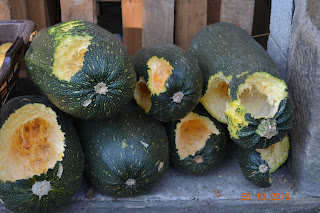 Some hours later the culprits gave themselves away .. 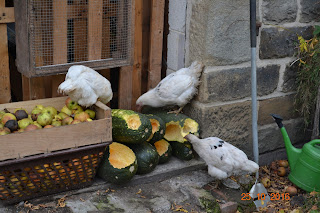 The other marrows that weren't in this pile are now in store and will be given to the chickens in the winter for a change and something to do. That way I won't have to think of how to cook them too. win win.
Last week I had a whole morning when I didn't expect to see anyone or go anywhere so I set to to process some more stuff. The previous evening I cut up two red grapefruit, four sweet oranges, four lemons and a couple of pounds of cooking apples.  I just cut the citrus fruits into six and then thinly slice these segments. I peeled and chopped the apples and then put the fruit into a clean bucket and covered with seven pints of water, covered the bucket and left overnight.
Here is the contents of the bucket poured into a large jam kettle. This I cooked slowly to reduce. behind the pan is some bread rising (no point if wasting the slow low heat. To the side is a bowl of cookers. 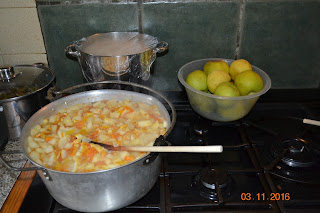 While the marmalade is simmering and the bread is rising I started on the tomatoes. I cooked a bowlful in the microwave and then pushed them through a sieve into a saucepan. The remaining pips and skins went into the chicken bucket 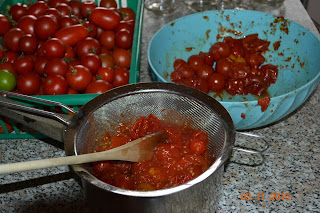 I now have two pans to keep an eye on while the contents reduce. 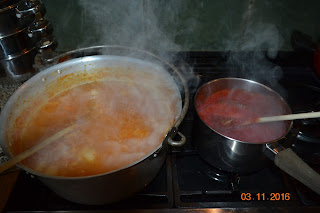 Meanwhile I bash the bread into shape and cover the tins with a cloth at the opposite end of the cooker. A blolognaise sauce is now cooking at the rear and the oven is on and a bowl of measured (6lb) sugar and some jars are in to warm. I skimmed quite a lot of fat off the mince before I added veggies and put this into the dripping pot, this I placed into the oven to melt it all into one with the older dripping. 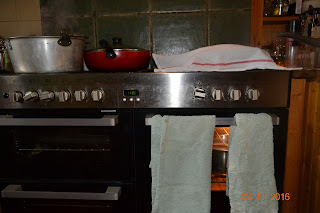 Once the fruit had reduced by nearly a half I added the warmed sugar and cooked to setting before pouring into warmed (mayo) jars.
So, sans bolognaise sauce and starting from 9 o'clock is marmalade and a paltry boiling of beetroot, strewed apples and dripping, a loaf and some cheesy breads and tomato puree. 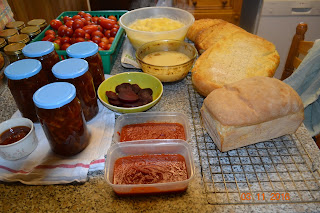 Lastly, I thought I would share a pic of the books I am reading or have just read currently. I always have at least four/five books on the go and read whatever reflects my mood. I only read in bed at night, from about 11.30 until 12.30-1.00 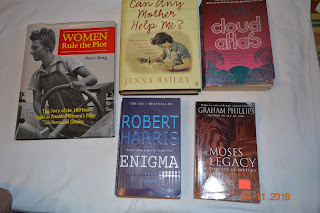 The Women Rule the Plot was a present and the others I bought at charity shops.
That's more than enough for now ("too true" you say)
Back soon
Gillx
PS It's a long time since I did a cooking-type of post, I hope you weren't bored with it.
Posted by Frugal in Derbyshire at 11:54