Using the Veg and Remembrance Evening

Hello Fellow Frugellers.
On Tuesday a friend gave me two huge bunches of chillis, just a fraction of her mammoth crop this year. Aren't they impressive?.... and HOT!! 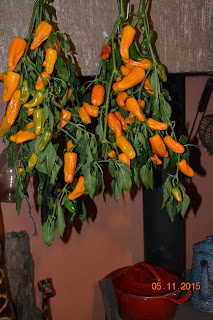 I have open froze(n) some on a tray and put some to dry. Any more ideas folks?
In my last post I said that I would share a recipe made from some of the veg picked that day. I had been to Lidl last week for the winter iron-rations and bought some ricotta which was on offer. I used this in the mix.
Firstly I made a pancake mix and made six pancakes.
In a pan I sweated a chopped onion,  then added six grated jerusalem artichokes. When these were soft I added some shredded kale and spinach, when this had wilted down I added the ricotta cheese,  a couple of tbs of grated parmesan, salt, lots of pepper, nutmeg and a couple of tbs of milk. This mixture was rolled in the pancakes, which I then laid out in an oiled dish on a bed of sliced over-ripe  tomatoes. These went into the oven until they were heated all the way through.
They were very tasty , though EGD said that some grated cheese on top would be good. I agree with her!
I think I will have a go at some artichoke rosti as they cooked so well grated in the pancakes. I guess I will need to season them well or they may be a bit bland.

It is very warm for the time of year, though wet - good growing weather! Today I picked three buckets of  runner beans, a bowl of brussels, a large bunch of beetroot, the last of the sweet corn (9 cobs), MORE Jerusalem artichokes and MORE spinach. I also found a couple of small cucumbers that I had missed and a mixing bowl of tomatoes. and as for apples!!
It's ridiculous. it's November for goodness sake! I should be concentrating on my Christmas and winter cooking and I'm harvest processing for England here.

I need to start baking again tomorrow as it is our Remembrance Evening next Thursday. After a short service we have tea and cake and a good gossip. The older people in the village really enjoy getting together. We started to hold these evenings three years ago when our Civic Society rescued the wooden war memorial plaque from the empty mission in our village. This year we also have THE BELL on show. You may remember that the old mission bell was to be sold by the mother church and that we set up a fund to buy it back for the village. We raised enough money to offer the scrap value price for this Taylors of Loughborough bell (£400) prior to auction. We are now asking residents for ideas ( and probably further fundraising)  as to how to display this for the village, while keeping it safe from the metal thieves. The ideas coming in from people seem to lean towards combining the war memorial with the bell into some sort of memorial plinth. Watch this space!

When we held our first Remembrance Evening it was declared open by Stan the eldest resident of our village.  He died last Tuesday. He was 99 years and three months and had lived in the village his entire life. His passing will add an extra frisson of thoughfulness to next Thursday, especially as he was a D Day survivor.
Enough for now.
Take Care
Gillx


Posted by Frugal in Derbyshire at 22:09