Hello All
Quite s few of you enjoyed the pictures of colourful carrots, So here is another colourful picture from the garden. While late to flower there seems to be no stopping them now. Dahlias and Calendula to the fore, with pink spray crysanths' just starting to the right and nasturtiums to the rear. I sat on a bucket with my camera and a cup of tea and looked at this scene for some time. 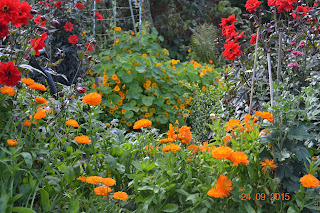 The tomatoes were a little late starting too and while the main crop is coming to an end the "Sweet Million" are still going strong. There are lots higher up..rubbish pic I know. 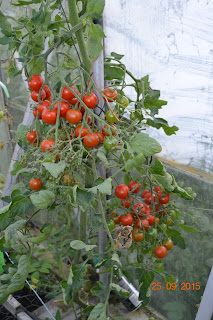 Here is Coda and Sammie playing with a large Sticky Stick. They help themselves from the pile to be processed outside David's workshop and though we give them a smaller one each they prefer to share. 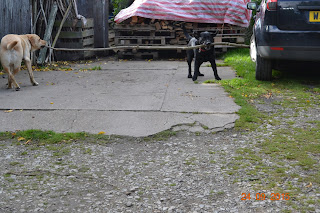 When David saw them he said "I wondered where the scratches on the car were from" oops!

Just a quick one today. I'm off picking more Damsons as they are selling well and I haven't even put any down for the wine yet, though  have made a few jars of jam.
Back soon
Gillx

Posted by Frugal in Derbyshire at 11:12