Sustainability and a missing cat

Over the last couple of years I have tried to be mindful of the impact I have on the earth. (gosh doesn't that sound "noble" ?!) Being  a facebook user. it hasn't taken long to find groups of like minded people and I have picked up quite a few ideas and bits of information that I can apply to my own particular circumstances. I do find some of the folk go a bit far for me. I'm an advocate of "good enough" (achievable) parenting and reckon its a good place to start in attempting a sustainable lifestyle. Obviously as a smallholder, who aims to be as self sufficient as possible I'm in a pretty good place to start and have indeed been practicing some of the ideas for years. However, these have been mostly for our- own- little- world -type stuff. Thinking beyond this to the wider good is something else. So my word/ mantra is now Sustainability with a view to to decreasing the amount of waste  and/or pollution we make.. I've always been a bit of an eco-warrier, but there are aspects of being environmentally aware that I hadn't considered .

I don't know how many folk are interested in this but I thought I would share my "journey" on this blog. Just in bite sized bits so as not to bore you too much and if you aren't interested just scroll on by to the rest of the dross I post!

Easy bit first. For a couple of years now we have had our milk delivered in glass bottles. Thus really has made a difference to the amount of plastic that goes into our recycling bin. The milk is from a Derbyshire farm, thus cutting miles and supporting local farmers (and milkmen!) There that wasn't too preachy was it !?

This weekend our cat Baloo went missing. Now I'm not too fond of Baloo as he is half Bengal with full Bengal trait of fizzyiness. He is prone to the odd bite if you approach him from the wrong side, which David calls a love-nip (it isn't!) and has been known to suddenly get hold of your face with his long claws, which David says is holding you close (it isn't!) I decided that he hadn't been stolen as they would have returned him within a couple of hours and would be identified by the scratch marks. He went missing at tea time on Saturday and though I am not fond of the boy I wouldn't wish him harm and really wanted to know if he was well. I don't think we thought of much else but him throughout Sunday and I visited neighbours to ask them to look in their sheds etc.  At 7.15 this morning a cold cat a wailing banshee walked across my face. He was home! Given the time I suspect he had just been let of a shed or garage by someone on their way to work.  Here he is the little love. Incidentally he is a great mouser 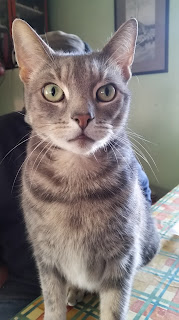 Posted by Frugal in Derbyshire at 16:57