Update on our Cockerel

Morning Fellow Bloggers!
Thought I would update you on HughTwo. Here he is looking good. You can just see his aluminium splint? 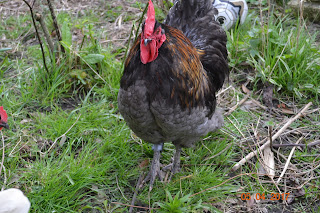 Here he is looking for all the world as though he is king of the Roost, which indeed he is. We are delighted with his progress and though he is still limping quite badly his foot, which was turning, in is now straighter than it was. He is such a gentle boy (though extremely randy!) and never shows any aggression to animals or humans. If the girls squabble he runs up to them and stands between them. I think he must have gone on a course about diffusing difficult situations! He is (supposed to be) a Lavender Orpington.We are fond of Orpington cockerels because of their natures. HughTwo is so named because he is so like our Buff Orpington Cockerel Hugh, who was an absolute sweetie. 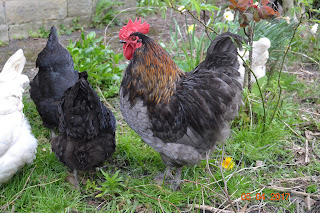 We have decided to leave the splint on for at least another fortnight. Fingers crossed he will have no lasting problems.
The sun is shining today and I am off to do a spot more posting for the Civic Society and the Canal Society.
I mentioned the blossom yesterday, here is a picture of one of the front garden damsons. 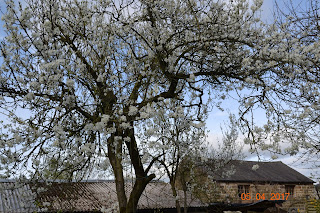 I have just found this picture of Hugh the buff Orpington. Here he is sitting with one of his many wives. This shows his gentle nature. Can you see the baby between them? We have no idea why it is that colour unless Hugh was cuckolded by ?! 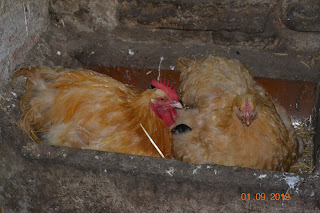 All for now
Gillx
Posted by Frugal in Derbyshire at 09:49