Hello
As mentioned in my last post. .......
Here is the half pig I bought from a friend. She had it slaughtered and would usually have it butchered too, but as the abattoir was busy with Christmas they could only cut the pigs into six.
Here is my half, cut into three. 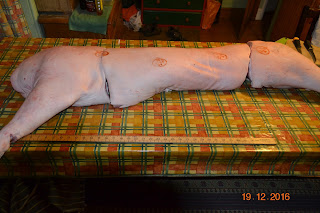 There was quite a lot of fat on it, but we are okay with that as it adds to the flavour and makes it more succulent and it looks like pork used to look. It didn't take me too long to cut it into joints and chops, which I froze apart from a good size leg joint that I chilled to roast on Christmas day and a piece of belly pork that I determined I would home cure for bacon  in the manner that Cro a blogger in France does. 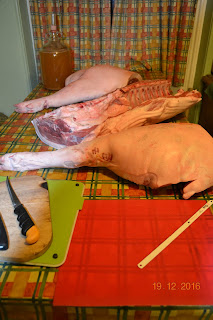 Below is a (not very good) picture of the belly joint in the salt  I left the rind on for the process, though Cro tells me it is likely to be tough when finished, so I will remove it when curing is finished.This is coarse sea salt mixed with brown sugar ( I used demerara) black pepper and herbs. The second day I poured off the liquid that had gathered and put more (reserved) salt mix over the joint. I turned this again over the next four days, when I washed off the salt, patted the joint dry and hung in an airy outbuilding wrapped in muslin. It will be ready on the 9th January. I believe at this stage you could smoke it if you had the facility, but I shall try it unsmoked first.
Just had a peek and it is looking and smelling good so far. Can't wait!!! 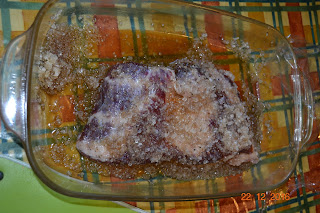 And so to Jaffa Cakes....
The Jelly -- A few hours before (or the day before) you are due to bake, make a jelly (from jelly cubes) with 150mls hot water instead of 400ml and pour into a shallow tray and refrigerate
The cake bases -- Make a fatless sponge with 1oz sugar, 1 oz flour and 1 egg (beat egg and sugar together until light and fluffy and carefully stir in the flour) Grease  shallow patty tin tray. Put a large spoonful of mix into each patty tin and cook until very lightly browned and firm. This mix made 4 dozen little cake bases.
The chocolate -- melt chocolate (we used a mix of dark and milk choc) in a bowl over a saucepan of boiling water. When melted, take off heat and allow to cool.
While the chocolate is cooling cut rounds of jelly to rest in top of the sponge. We used the top of a salt pot (this also serves well to cut holes in doughnut dough!) 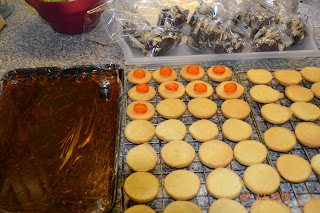 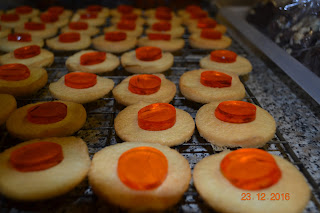 When the chocolate has cooled sufficiently (you will need to test this on any rubbish sponges you might have) so that the jelly does not melt immediately, spoon over each cake and smooth over.. Voila!!! 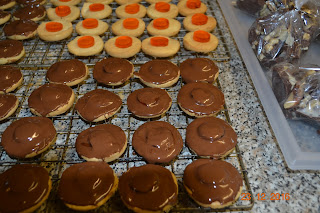 Look pretty good don't they? They cost very little too.
Hope these work for you, they are certainly easier and more like the real thing than those made on the GBBO.
Back soon
Gillx
Posted by Frugal in Derbyshire at 14:59