Granddaughters, bees and the dog

Hello All
Gosh it's been hot around here lately. We were told it would probably rain today and it didn't, it's been another scorcher. We have had very little rain and that we have had has soon been dried up by the heat.

It's been a granddaughter sort of day today. Our youngest granddaughter stayed overnight last night and all today until her dad picked her up this evening, which was a lovely surprise.(teachers are on strike at her school) Before tea her cousin arrived to collect her dog (we provide doggy day care two or three days a week, and to do some sewing. So we all had tea - Fish (caught last weekend) cougons, tomatoes and cucumber and broccoli from the garden and jacket potatoes.
When the little one went home we set about some sewing. EGD is very competent with a sewing machine, but less so with patterns. Tonight she was able to make sense of it so she is all systems go now with her latest project which is a a present for a young relative.
I am SO lucky to have the grandchildren nearby and to see them often.

Here is another bee story warning!
We had ANOTHER swarm this week , which we boxed and placed on a an old table under the tree from which we collected the swarm. We have completely run out of equipment and are cobbling hives together from  everything and anything. The box n the table hasn't got a roof even, just a sheet of cardborad covered in a plastic bag and held down by an empty brood box. (As I write D. is in his man-cave finishing a lid for these bees)The front garden no longer resembles a garden, more a bee field, with the grass uncut and the weeds growing rampant and hives everywhere. Fortunately our bees are extremely friendly and even though we have fifteen hives in the front garden we have had no complaints from the neighbours and received no stings ourselves. We often sit in this garden and my three washing lines are here too.
Here is a pic of part of this garden. I would show you more but I am too ashamed at the state of it!! 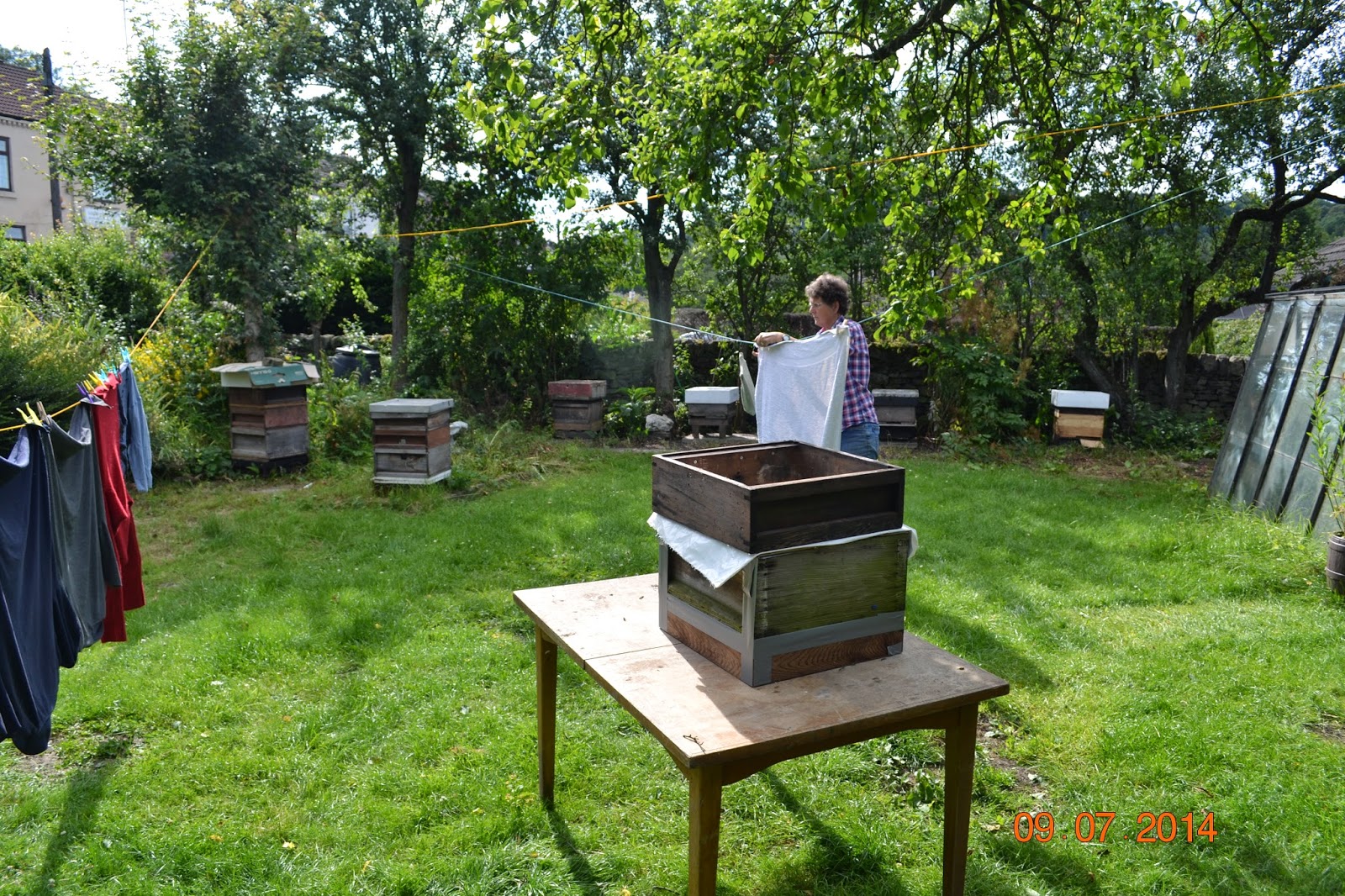 While we haven't been stung our eldest granddaughter's dog was yesterday. We noticed him going too close to the hives, so called him back. He gave a little jump and my daughter said " I think he has just been stung" We looked him over and he seemed okay. A couple of hours later I noticed that he had a rash on his tummy and wondered if it might be something he has brushed against in the paddock. However his face started to swell and the blotches on his tummy  started to meet up so it was a dash to the vets, who when he arrived said "Oooh that's a classic allergic reaction" and promptly gave him a shot of steroids. He is looking much better today and I have strung a line of the mesh I use to deter butterflies from my cabbages, across the garden so that he has to stay away from  the hives. Other routes to the hives you can't see in this picture have been blocked off too.
We noticed that the hive he was close to had actually been moved slightly, so he must have given it a bit of a push!
Hanging washing is going to be a challenge negotiating the barriers I think.

That was written yesterday. I couldn't quite get the energy to proof read and publish last night.

Back soon
Gillx
Posted by Frugal in Derbyshire at 10:34