Hello,
Gosh It's been a while since I last posted. However people are still commenting on it, which I'm so pleased with.
In the field next to us one of the utility companies has been excavating a problem. This has been going on for some years now. In order to get at the problem they have shifted tons of earth into a huge bund next to our wall. This bund is actually three bunds making a large "C" shaped earthwork. Each year the weeds grow really high here and the butterflies visiting the flowers are lovely. A couple of years ago they sprayed without our knowledge and a large ash and a birch that we are growing at the boundry were damaged (initially we though we had ash dieback) The weeds died back and became quite a fire hazard next to our barn.
Last week David walked into the field to see a guy spraying the bund. He hot foots it over to the bloke and asks him what he is doing. The guy with the sprayer told him that someone from the village has complained about the weeds being unsightly and possibly seeding into their gardens, so they are spraying it with weedkiller. David is incandescent by now.. "What weedkiller?" He asks "Roundup" the guy says proudly. Despite David wanting to throttle the guy (goodness knows it wasn't his fault, he was only following orders) he politely asked him to stop, He informed the guy that it was our land that was next to the weeds and that we had been growing without any chemicals for twenty five years and that there were 14 hives of bees within feet of his spraying. All credit to the guy, he stopped immediately. A couple of days later a digger arrived, removed the top layer of soil alongside the weeds and then another bloke followed on with a strimmer to our wall. MUCH BETTER. ! 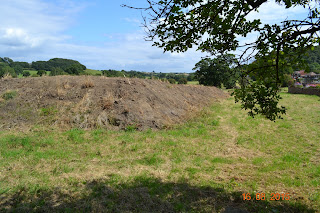 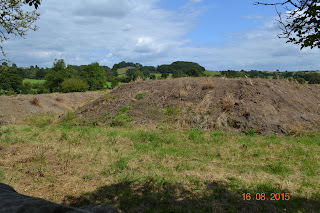 Interestingly, before we knew that next door was being sprayed, I was hanging the washing out in the garden that houses the hives  and a few bees were "fizzing" around me. We live in harmony with the bees in this garden and this was unusual enough for me to mention it to David. We wonder if the two incidents were connected.
Here is our outside eating area, you can see the bund over the wall. 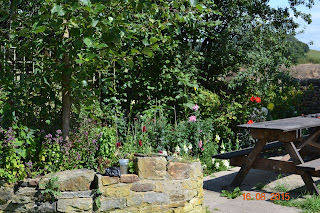 Earlier this year I realised that we hadn't made too good a job of digging up all last year's potatoes, when a few leaves appeared . I decided to leave them as we were not going to do much with that garden this year. All I did with them is throw some grass cuttings around them. A couple of days ago I noticed that a couple of those plants were starting to die back so I dug two plants up. The first plant yielded 5.5 kg and the second 3.5kg. What a yield and there is more to come.
Here they are. They are Sarpo Miras and are a blight resistant variety that are superb for jackets and roasties. 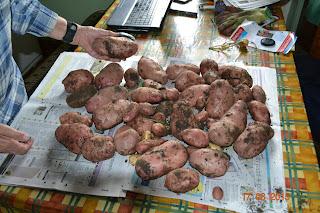 Off to Cornwall tomorrow for a spot of sea fishing. as usual the family will move in to oversee the animals and greenhouses.

Thanks for joining in with the discussion about food intolerance.

Thought you might like to see Coda, our granddaughter's dog with a small stick that he has found. He hopes that we will throw it for him! 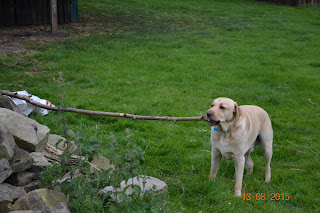 Posted by Frugal in Derbyshire at 09:30