Hiya
Last weekend we had our annual Bash which we call our "Festival", we have been holding this party for quite a few years now. It started as a small family party (can't remember the occasion now) over the years more friends joined us and camped so that they could have a drink, the numbers grew as we and our daughters added more friends. One year it absolutely poured and someone said this is just like Glasto and the term Festival was adopted.
This year there were thirty tents and a couple of hundred souls. Everyone brings a plate of food, a drink and a chair and/or a tent. This year we had four barrels of real ale which we ask for a donation of £1-50 a pint. This covers the price of the beer and if donations exceed cost the difference goes to our chosen charity. ( as does the proceeds a a little raffle we hold with gifts that guests bring if they wish.
They start arriving on Thursday night and Friday night is almost as big as the day itself. This year our godson made some great braziers from tyre rims (picture to follow) and these were stood on slabs and served as campfires for groups dotted around the field.
The field is now back to normal except for a tent that is to be waterproofed and the large marquee that needs some attention.
Quite a few people that bought puddings also bought cartons of cream, which we keep in an electric cool box on the tables with the butter. On Sunday morning there was a litre and a half remaining so yesterday I decided to make some butter. I have made small amounts before (mostly by accident) but made an effort to make some, assessing if it was a feasible/ frugal way to make our butter. We love butter in this house and only use margarine for cooking.
I am sure many of you have made butter so bear with me!
Here is the double cream. I don't know how much it cost so I have googled a price site and it would probably be about £2-80 a litre (much cheaper if it was on offer of course) which equals £4-20 for these. 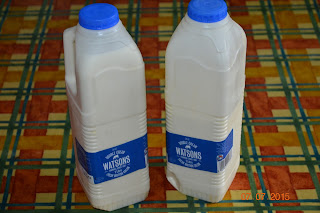 I put this into the Kenwood  and whizzed past the thick stage to the sloshy stage (when the water was thrown across the kitchen!) I strained this all through a fine sieve over a bowl. I but this liquid - buttermilk- into a measuring jug. 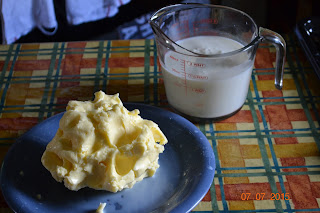 I washed the butter in running cold water, squeazing it until the liquid ran clear from the butter. I added dampened salt and bashed it into a rough butter type shape. This weighed one and a half pounds. 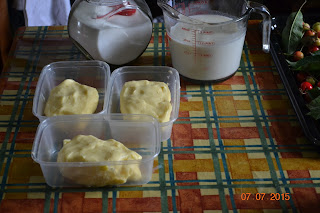 As you can see there was a yield of one and a half pints of buttermilk. I have split this into half pint cartons and after checking that I could do this, I have frozen it to make soda bread.
In summary
From one and a half litres of double cream and a tablespoon of salt I have made one and a half pounds of butter and one and a half pints of buttermilk. I reckon that if I had bought the cream at full price I would have broken even, with some yellow sticker cream it would have been worth doing financially (obviously it didn't cost me anything on this occasion)
Off to now try to beat the birds to the cherries and tie up the broad beans which have decided to go horizontal on me!
Back soon - hopefully with my post on retirement Sue.
Gillx
Posted by Frugal in Derbyshire at 10:21