Me again with an update...
Here is the Gas Meter site, sans hen 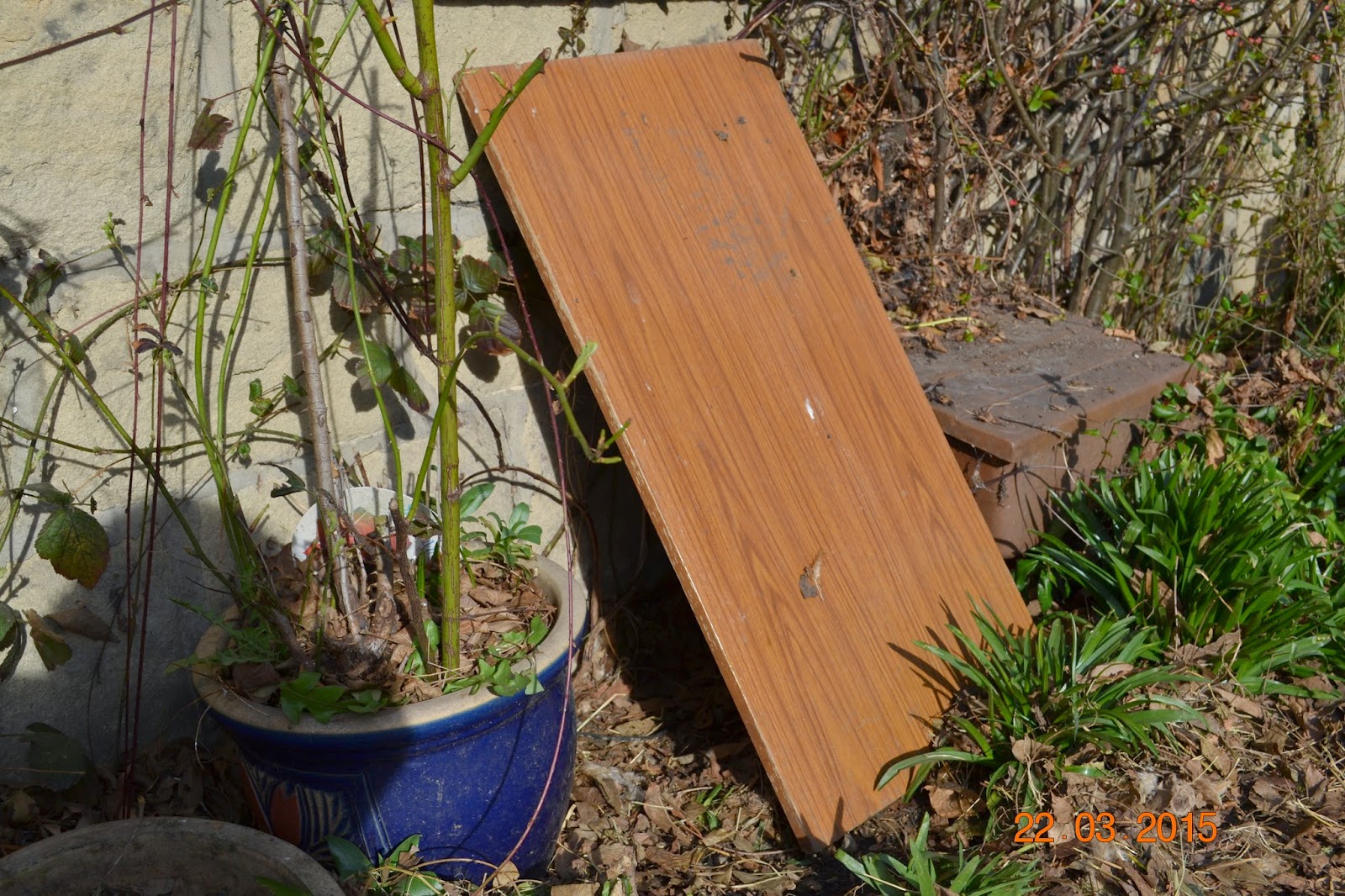 I went out to have a look after I posted and slap bang in the middle of a path sat mother hen. Clearly, the chicks had run out of the nest and she had followed them and was sitting on them to keep them safe. Several feet away at the gas meter site were three cold eggs and a pile of egg shells. I went over to the pile and found that the eggs were cold., though one was cheeping..what to do? I fetched a big cardboard box from the garage, put straw thickly on the bottom and ran back to Mother Hen. Picking a hen up that has chicks under her is not a job for the faint hearted. Sustaining several vicious pecks to my hands and arms I put her in the box, she immediately jumped out of course, but I soldiered on. I picked up the five chicks that were on the path to place them in the box and she attacked me again and another chick fell out from under her wing. When they were all placed in the box she finally got the idea and jumped in with them. I then placed the remaining eggs under her  and after several more vicious pecks and some very un-ladylike language (from us both) she settled. I covered half the box with a cloth and left her. I then set about clearing up the egg shells and under the pile of empty shells was a cold dead chick. I was going to dispatch it to the bin with the shells but thought it might be worth a punt to revive it ( we have bought a chick "back from the dead" before ) So I tuned on our incubator to warm and fetched a hair dryer. while the incubator was warming I cuddled the chick in my jumper and from about a foot and  a half away blew warm air onto it. After  half an hour it started to move and began  to cheep faintly, so I popped it into the incubator. I put  a jam jar lid of water and one of chick crumbs in with it an I am sitting here fingers crossed.
This interlude successfully got rid of my morning!
This afternoon David has worked on getting an Ark ready, while the rest of the family have been assembling a run for the lambs, from pallets (of course). By mid afternoon the chick in the incubator was making quite a racket and was immediately called Lazarus. Here he is.., 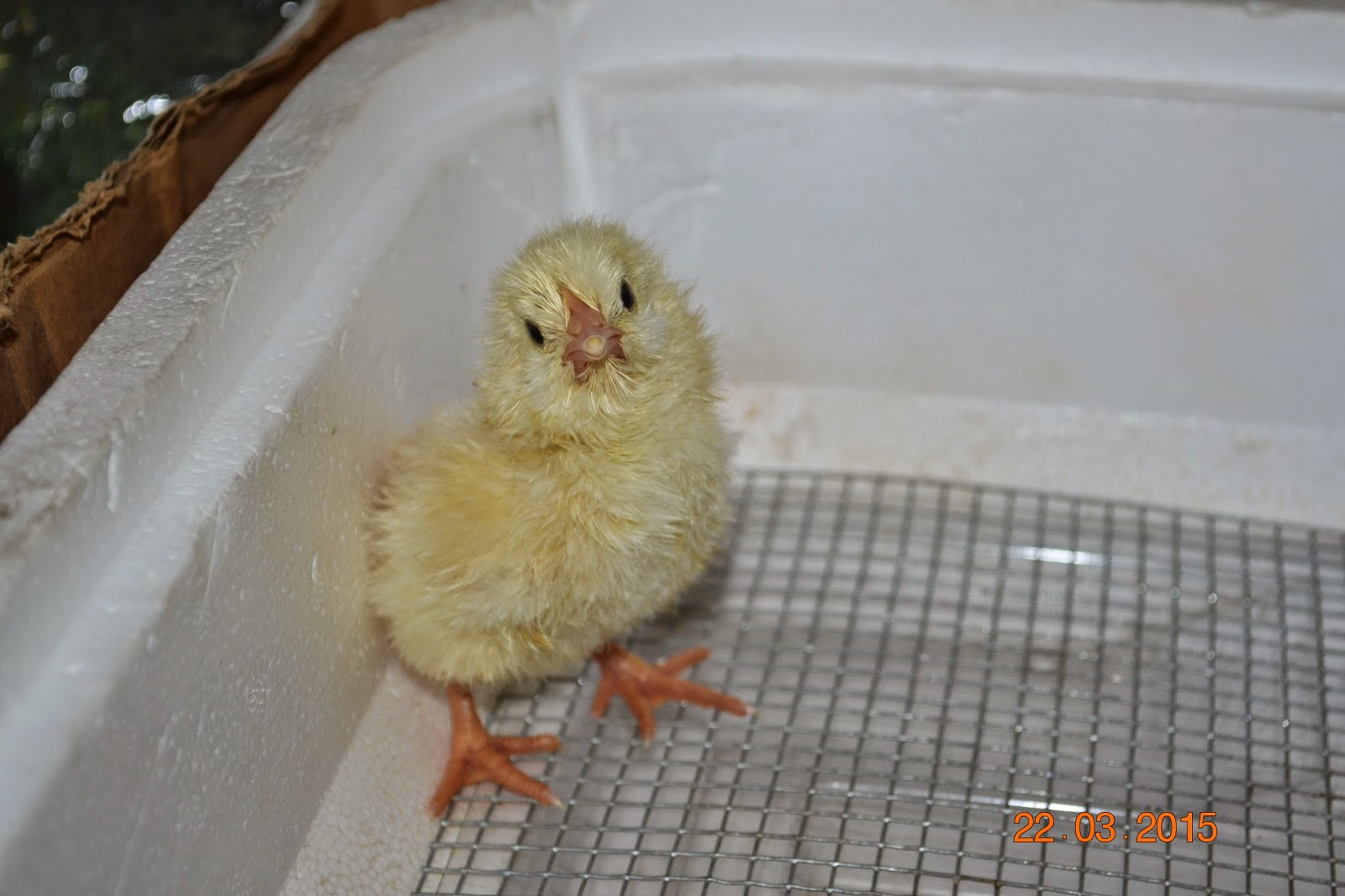 I guessed it was worth risking  introducing him back with its brothers and sisters. While one of us put fresh chick crumbs in front of the hen I snook Lazarus under her tail end. Result! in he snuggled.
After tea we carried the the box over to the ark and while David lifted up the hen (ooh the language!) and we placed the chicks in the run ..all 9 of them!! Mum soon followed them and settled down straight away.
Here they are..The Gas Meter Gang... 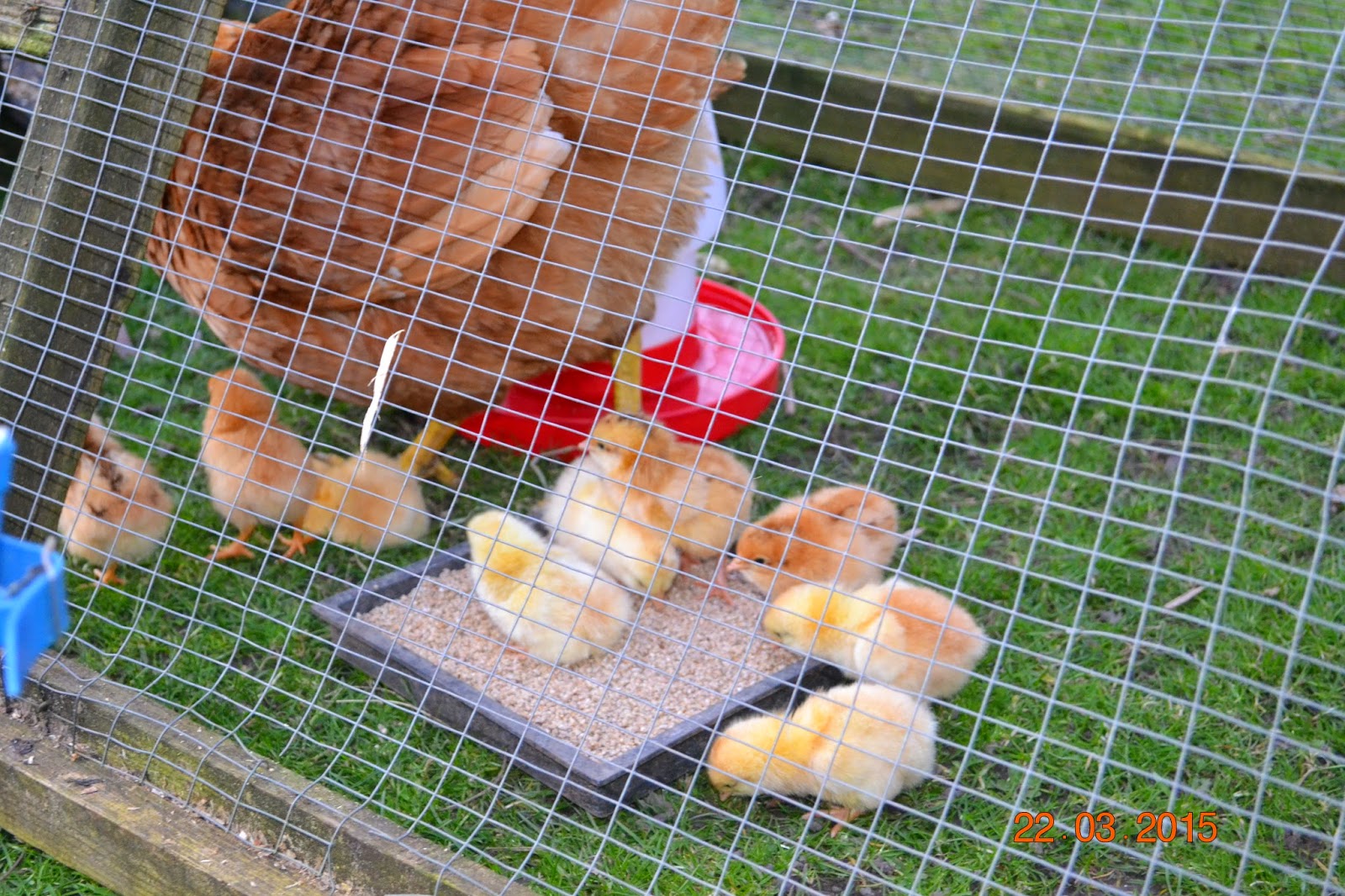 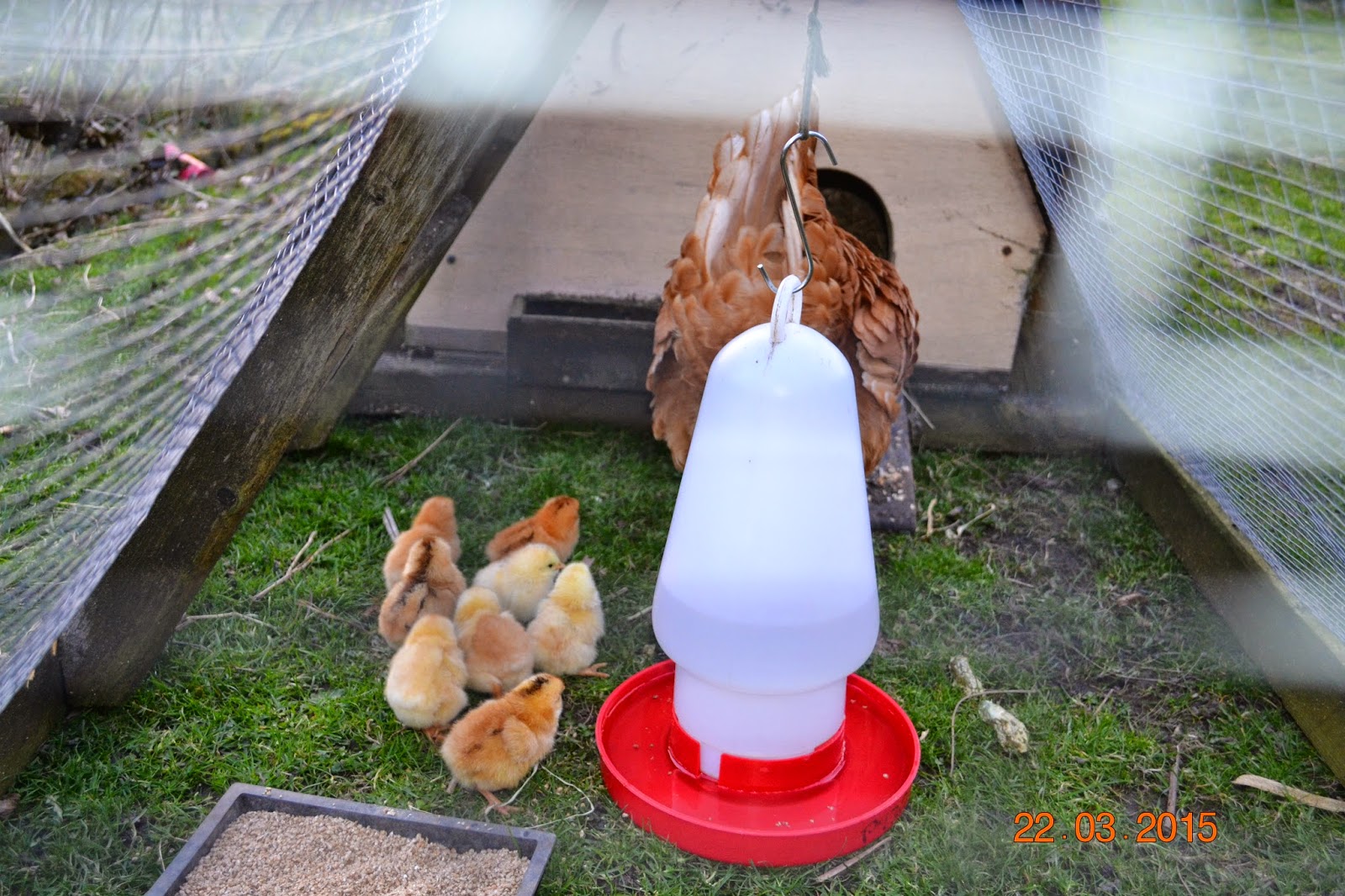 Two of the remaining eggs are clearly not viable and the hen has now kicked them out, but the third is still cheeping so we have put it in the incubator to see what happens.

Once the run was assembled for the lambs they had their afternoon bottle. Here they are being fed by my granddaughters. 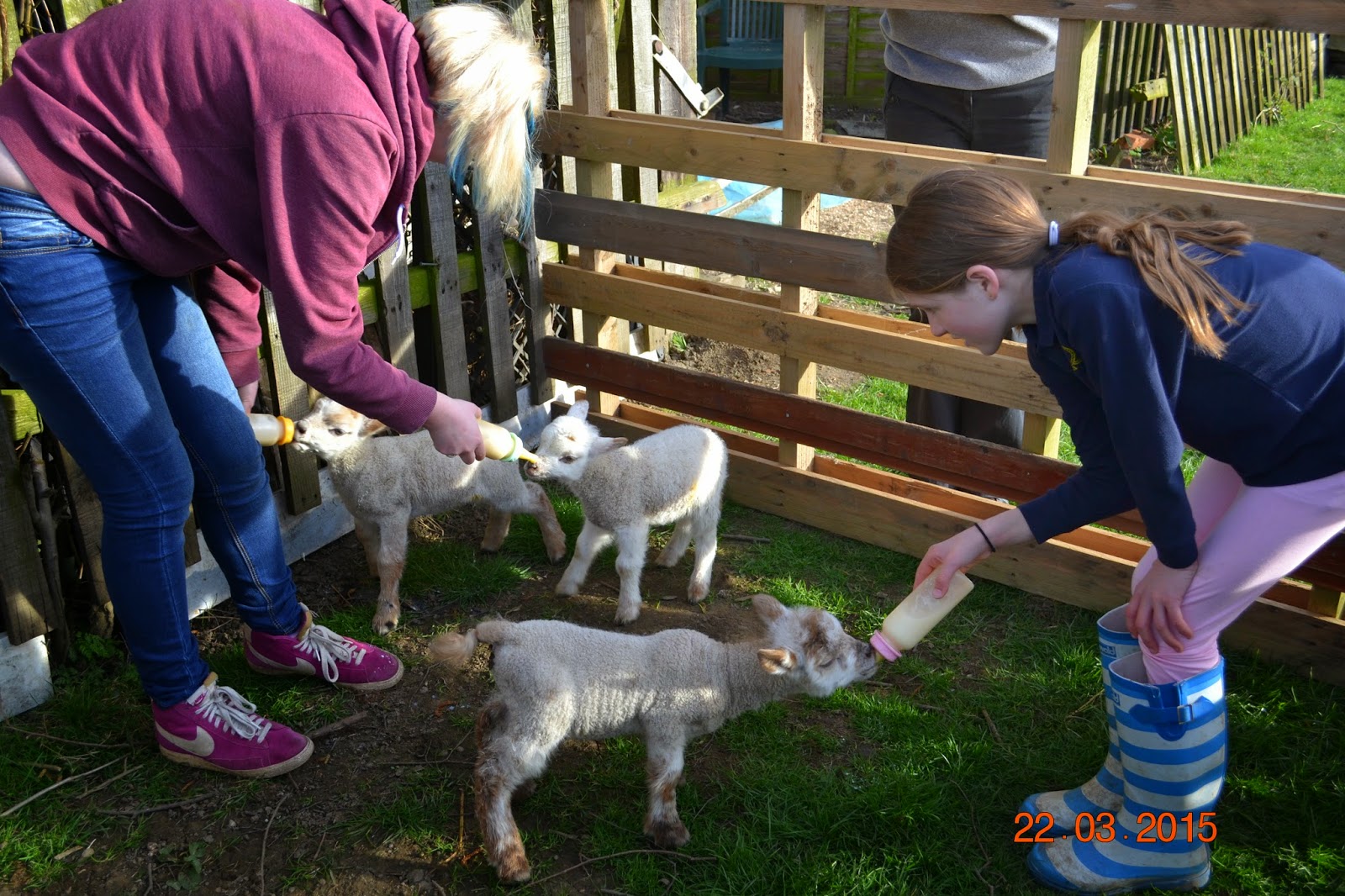 And here are said granddaughters with their dogs. 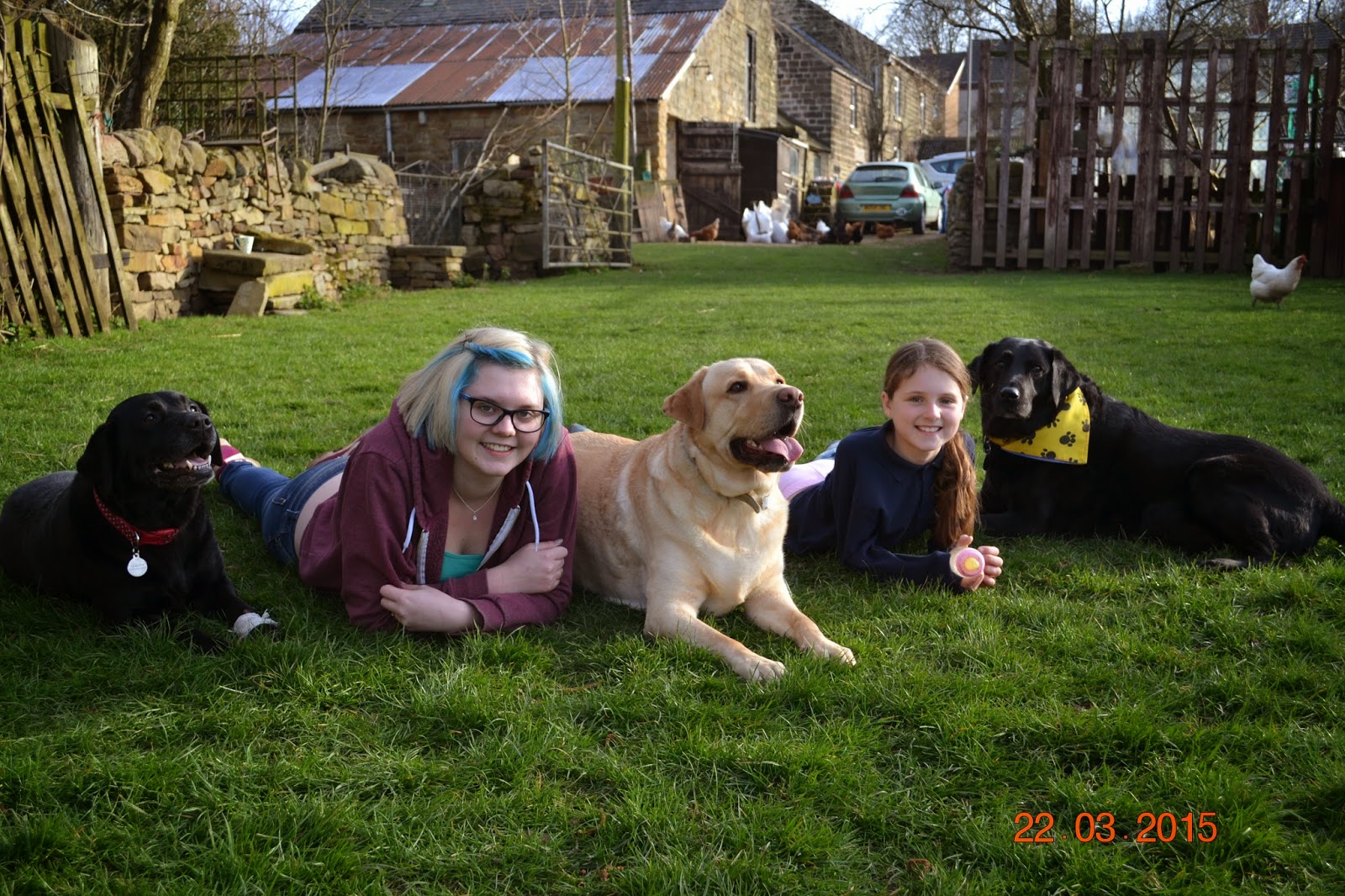 I think that is enough for this post.
I'll read the comments from my last post now and reply to everyone.
Bye
love Gillx

Posted by Frugal in Derbyshire at 19:16