"Why do we grow pumpkins if we do nothing with then?" asks D.
Actually WE don't grow them our grandchildren do and they love to see the big yellow balls growing and growing. I do put pumpkin into soups, last week half a Pumpkin went into the tomato soup and nobody knew, as it was willy whizzed into the pulp. I also roast the plumpest seeds for a snack, so we do eat some pumpkin  He was getting a touch narky because he had banged his head on the mobile that is three pumpkins in nets hanging in the end garage
. "Why don't we have pumpkin pie?" he says.
I'm pretty sure we don't like pumpkin pie as I made it MANY years ago and I'm sure nobody ate it. However tastes change, so I determined to make one for Sunday's pud. The family were round for tea ..Roast lamb (don't ask) I had picked up a few brambly windfalls too. So I made two pies so that we had a choice of puds.
Crikey! life really is too short to spend, I don't know how long, getting the pumpkin puree right! However I persevered and in the oven it went with the apple pie.
A couple of hours before tea our eldest daughter and husband with their daughter arrived with a bag full of veg. YGD's homework was to make a Woolton pie. They are studying WWII and she is really interested in the subject. I thought it was something she fancied doing, but it really was homework for the whole class! (I really can't imagine ALL the children doing it) Anyway, off she set with her recipe and copious amounts of veg were peeled and chopped. "Good grief" I said. "Is this for one pie for a street party?" She kept doggedly to the recipe and a huge saucepan of vegetables were bubbling away on the stove with the Marmite and oats.
She then made the pastry which went together well. Meanwhile her dad was taking pictures for her schoolwork. After the pie was made there was a huge quantity of chopped cooked veggies left, which will make a soup and a cheese and veg pie with some left over cheese sauce from our main meal.
The pie went in the oven  at 180 which was an educated guess on my part as there was no temp give in the recipe (just "moderate")
After our roast (delicious) it was time for ...THE PIES.
Everybody had to try the Woolton pie first and it was very good.
Then came the the pumpkin pie......mmm... NOT a success ! D. valiantly ate his "It's okay, but I wouldn't want it often" and the rest of us had one spoonful and went onto the apple pie.
The apple pie was eaten before I could take a photo of it , but here are the other two.. 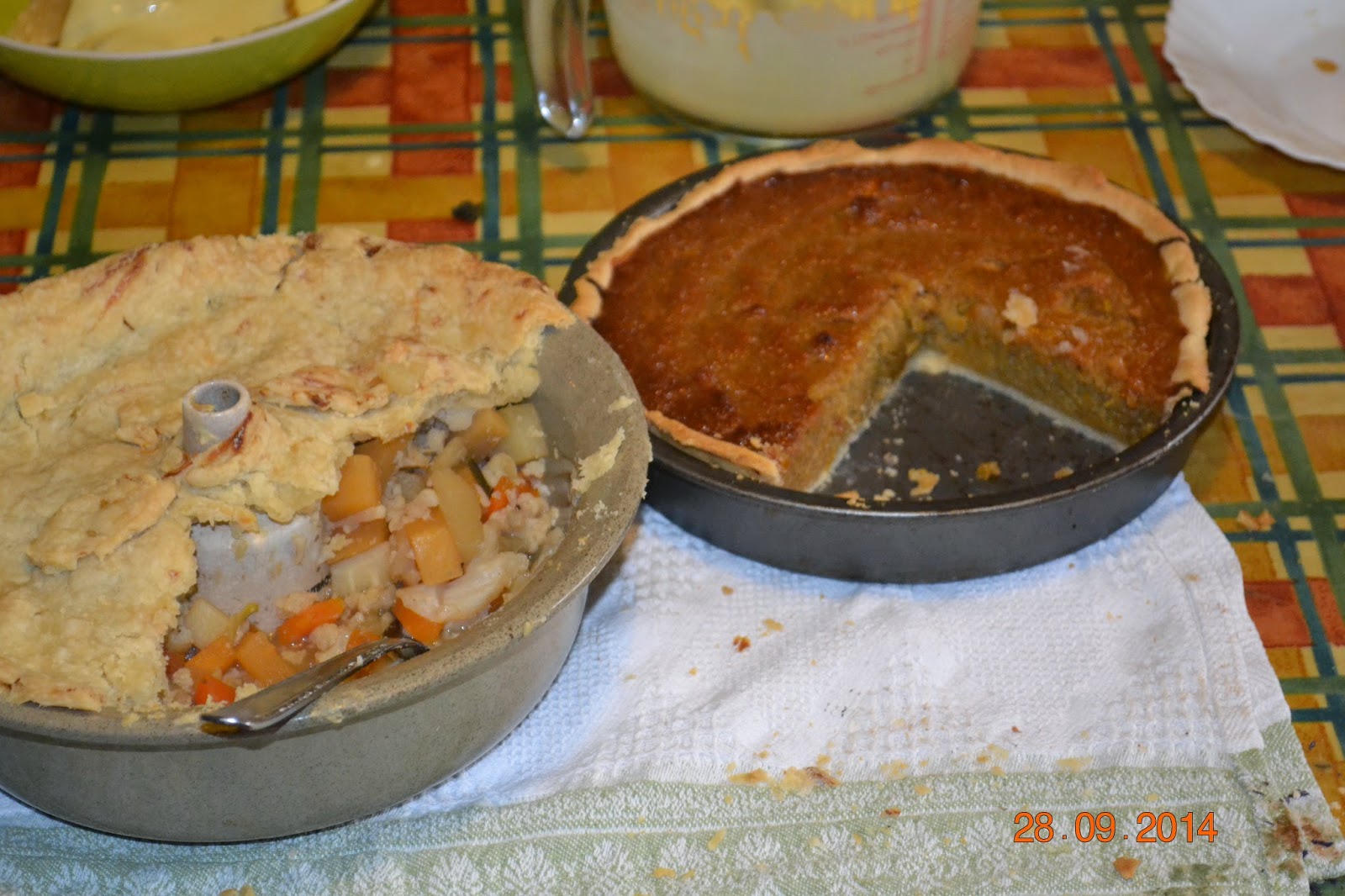 I think the Woolton Pie might make an appearance another day, the apple pie definitely will  and the Pumpkin pie.........?I think not!

Back soon
Gillx
Posted by Frugal in Derbyshire at 10:17