Potato Blight
Last week I noticed that our Pink Fir Apple Potatoes were showing signs of blight. I cut the haulms off half the bed (I ran out of time and energy to do it all at once) and bagged them up, in an attempt to stop the disease spreading to the tubers. I tied up the bag and put them aside ready to go to the tip. The next day I dug these potatoes up and dried them in the house away from all the tomatoes. Two days later I returned to the remainder, by now the all the leaves were affected. I dealt with these in the same way. as the first half. Just goes to show how quickly blight can take hold though.  Planted next to (touching)  the PFA are two rows of Sarpo Miras  potatoes. This is a blight resistant variety which I have been growing for four years now. This year for the first time I have taken a chance and grown them from my own seed. ( I will buy new seed next year) These potatoes, which are a late crop - ready around October, show no signs of blight and are going strong. We dug one plant up to see how they were doing and there was 2.5 kilos of potatoes.
Here is a picture of Sarpo Miras (on the right obviously) next to the Pink Fir Apple on the day I spotted it. 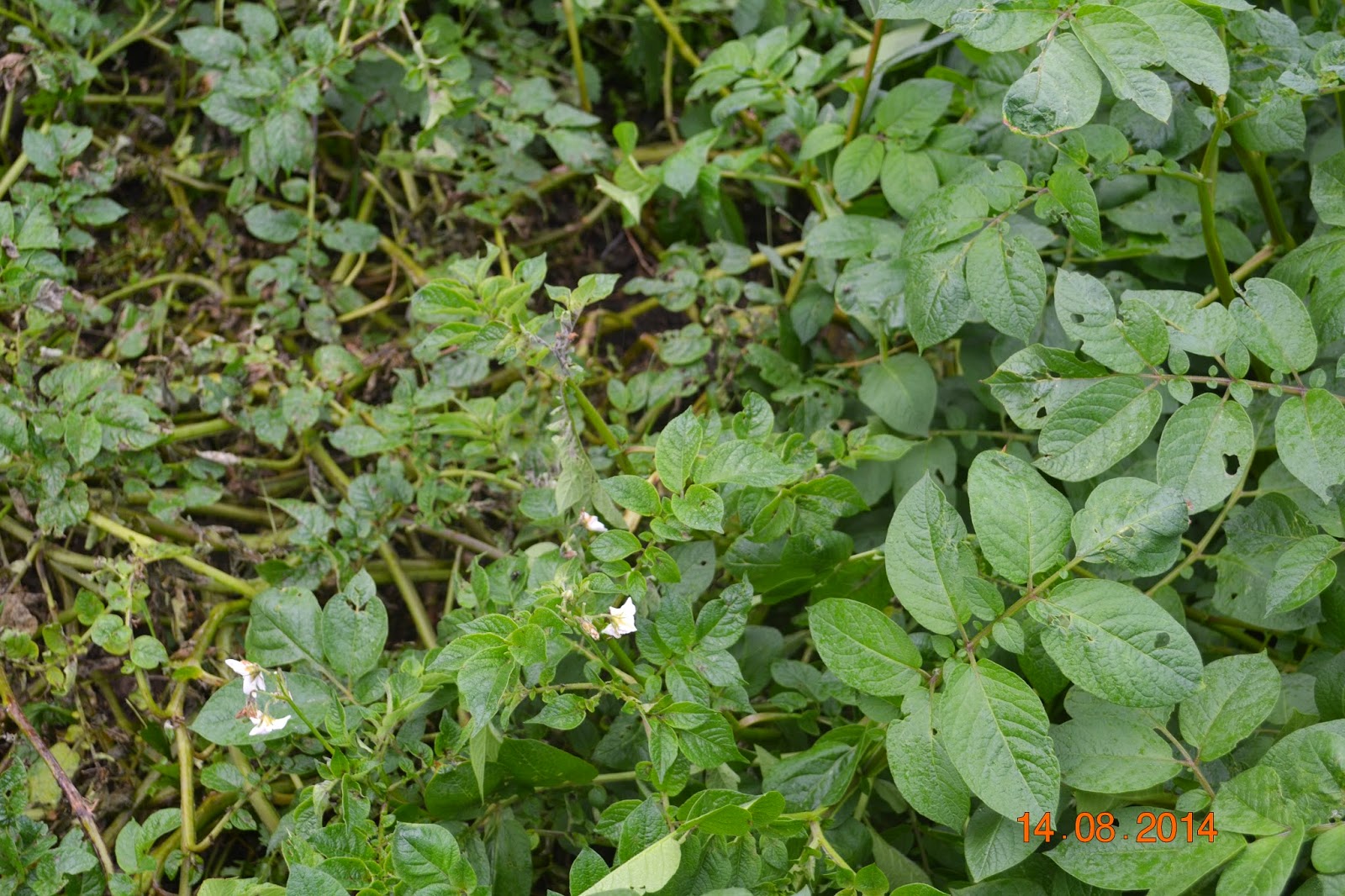 Sarpo Miras is a non- GM potato I am pleased to say. However, I read that millions is being spent to develop a GM blight -resistant variety, using the Sarpo line. What is that about then, as if I didn't know?! The GM giants are working towards making another killing I guess, with the accompanying restrictions, that demand dependency, placed on unfortunate farmers across the globe. Grrrr.

So far the tomatoes are clear, unlike Cro who at least has his winter preserves in, though I am keeping my eye on them.
At the mo I'm more concerned about the frost that is forecast for tonight ! I have bought in a number of squash and courgettes and any outdoor tomatoes that are beginning to ripen, before covering the plants with any mesh and plastic that I can lay my hands on. Fingers crossed.

It has been over a week since my last post as we have been very busy in the garden and have had lots of visitors and a grandchild stopping. so this post is a bit of a quickie.
My next post will definitely include my tomato recipes and I will tell you about a great recipe I have gleaned from a new follower on Blog Lovin.
Until then dear frugal and self-sufficient friends.
Gillx

Posted by Frugal in Derbyshire at 18:38