Hello everyone out there !
We live on the route to the Peaks and Matlock Bath. Last weekend was RIDICULOUS. Hoards of people driving past us on their way to stand shoulder to shoulder in Matlock Bath and the pubs actually serving them only two days after being told to shut!!
Our local pub, which is already struggling, would love to stay open. David meets some friends there once a week' David didn't join them last week because we have been staying away for some time, but joined in via his mobile. This week one of his friends organised a video link and everyone joined in from  home on their phones. The screen on his mobile got a little crowded but it worked pretty well really.  David says he will get his tablet up and working for next week. I wrote his answers down while he held his phone, which was pretty civilised, as I sat by the fire with a cup of tea. The only down side is that I really dislike quizzes and can't avoid them under these circumstances!
Has anyone tried to get groceries delivered from the supermarket ? Our grandson, J. organised a delivery for us online a couple of weeks ago. He chose Asda as Sainsburys was booked up for three weeks and Asda only one. We ordered 2 weeks supply,  thinking we would order another two weeks in a weeks time. Hah! Fat chance !!! All the supermarkets are fully booked for slots for the next four weeks, taking no orders  at the moment for after that. He and I have been trawling the sites looking for an empty slot as we have been told to do. This morning I thought I had one, which turned out to be a click and collect slot. Okay I thought J. will pick that up for us I am sure. Err it was for 6 o;clock on a Sunday morning 2 weeks away at a store a good 10 miles away! After a pow wow with J he tells me that by Monday he will have isolated himself for long enough since he was laid off from his job when he was in close contact with the public. So we have agreed that next Monday or Tuesday he will go with my list (and his own) and buy that which we need. I hear he may have to queue to get his car parked and then take his turn to go into the shop, but eventually he should get the deed done ( I wonder how his Aspergers will cope with it!)
We have reorganised one of our veg plots this week, the weather being so good and us not going anywhere. I have to say the two plots we are working are looking pretty good (for us) and I might even take a pic as they look nearly as good as the tidy gardens fellow bloggers have.
from early in the week here is a corner of the first garden. with Spring cabbage  "Durham Early" to the rear and (late) garlic to the fore of these. 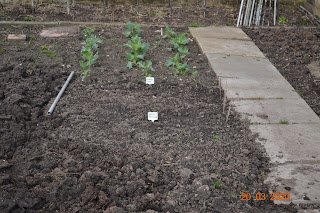 This next is a poor picture of the peach blossom. We had no peaches last year, but 40 the year before and they were absolutely lovely. The variety is  "Newhaven".  If the blessed birds will leave the buds alone we could get a good crop again in 2020 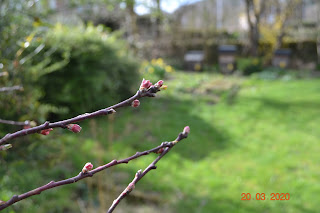 As we have pulled up the drawbridge we are not selling our eggs and honey from the door  the hens, of course are laying for England so we have trays building up. I have been trying to buy waterglass to preserve these eggs, knowing I will be extremely happy to have eggs for the slack times later in the year. I have struggled to find waterglass of food quality anywhere. I asked a smallholder facebook group I have just joined if they knew where to get it. One of the suggestions was that I look on Pinterest. I hadn't thought of that. So I dived into that cornucopia of interesting things to do. The only help that I could relate to was from Leigh at "5 acres and a Dream" who I follow  (and she me) Unfortunately I cannot get the make she suggests as they don't sell to the UK , but I do have somewhere to start looking over here now.
On a different issue (there she goes again at a tangent) one pursuit to interest me over the last week or two has been trawling the Net for parts to repair a couple of early Edison Phonographs for a friend of mine. He has two  early 1900s phonographs, both needing belts and needles and one needing a horn. I have found and bought a horn and some needles in an original tin but haven't had any luck with  the belts and I really would like to buy a couple of sapphire needles too. These machines are things of beauty. this one doesn't have a horn. 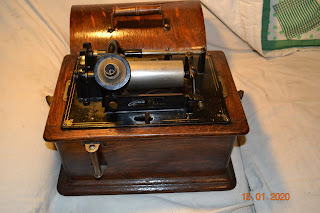 All for now
Anybody else missing their family ?
love Gillx
Posted by Frugal in Derbyshire at 20:59