Can you identify these old (antique) pans?

Hi People.
Anyone any idea what these pans were used for ?  They are for sale in an antique shop in a town near to us and neither the owner, nor my friend who is a collector of antiques are sure what they were used for. My Cornish friend who is up for the weekend suggests perhaps they were used to make clotted cream. I have no idea, but think they are rather lovely. 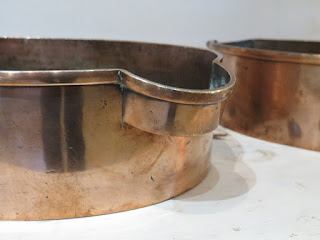 Back to normal (for me!) stuff  in my next post.
Gillx
Posted by Frugal in Derbyshire at 18:36 14 comments:


Hello It's me again!!
I'm rubbish at this regular/frequent blogging thing aren't I ?
Thank you so much for your comments on my last post, which I have finally replied to if you want to jump back to them. I was going to write something last week as there has been so much going on, but ended up reading other's blogs instead! Easily done isn't it?!

We were in Cornwall sea fishing last week. While David was fishing and my friend was away skiing I "did" the charity shops ( bought books and jeans) and nurseries. The vegetable plants were pretty gruesome and quite expensive at the nurseries and garden centre, so I didn't bother. However, when I called in Tesco for a pork pie (jealous Cro?) for our journey home they had some really strong reasonably priced beetroot and broad bean plants, which I bought to get ahead of the game as the late spring means that we have been unable to get anything in the water sodden gardens.
David did quite well fishing and bought home six pollack and two ling, which, when processed yielded 12lb of fillets. The bones, head etc I bought home as usual and cooked up for the chickens.
The chickens are now laying well, but a week ago Severn Trent closed our road to do repairs which meant we lost our customers and passing trade. So..... 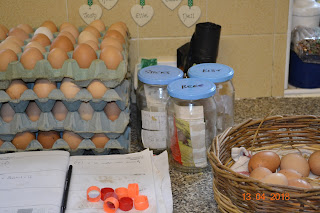 I have started processing the glut. So far I have made mayonnaise, pavlovas, omelettes and dippy eggs and quiche. I have bought some lemons and unsalted butter and intend making lemon curd. Any more ideas? I'm struggling to get waterglass, to preserve eggs,  from a chemist so I guess I'll have to buy online, but am struggling to understand the measures they give. The picture above is of the kitchen surface next to the back door.The leg rings are for 8 hens we rescued last week so that we can keep an eye on how they are doing. The jars are for stick money, egg money and honey money. The diary is for me to record my egg numbers, sales and events such as hatchings plantings etc. (just in case you wondered)
Look at this creature ! 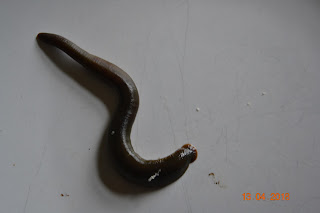 At first we thought it was a large leech and then we wondered if it was the New Zealand Flatworm that lives on our lovely and important earthworms ( nasty little blighter) when an half an empty worm was excreted from its nether end this was confirmed. We are now on flatworm watch!
Talking of plants, which I was a couple of paragraphs ago, the greenhouses are bursting with plants ready to go out or be potted on. As mentioned above I do buy some plants,especially those we don't need lots of. Below is my bargain buy of red cabbage plants. The 10 cell tray, for £1.99 yeilded 28 plants, which is good value, but more plants than I need so I will give some away. 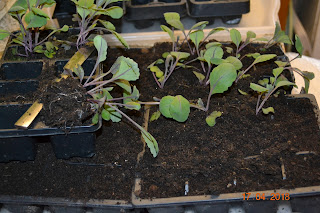 I realise this post is even more rambling and random than is usual. So I might as well soldier on with a couple more pictures taken recently.
I might have mentioned that I am intent on using up my stash of materials, which is huge and not for the faint hearted. I have decided that when I use some material for something I will not put any back but use it all up in some way or another.|This has mostly meant cutting out patchwork pieces for another project. 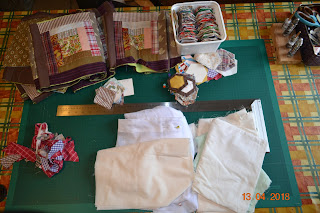 In this picture, from 12.o'clock we have a log cabin quilt I am making for a male friend, using up shirts and blouses, in the margarine tub are hexagons tacked and ready to go, in front pinned to (Christmas) card ready for tacking, at 6 o'clock is net curtaining, muslin and pillow cases for vegetable and produce bags to take to the supermarket to put veggies in instead of plastic bags, at 8 o'clock is all the scraps I can do nothing with which will be used for stuffing and back to the top again are very small squares for a scrappy quilt. Blimey that was a bit of a marathon explanation, thanks for sticking with me!.
I reckon that this has gone on long enough, so will finish with a couple of pictures of our new cat, Baloo
Firstly sleeping with previous arch enemy Sammy and then him keeping warm on my laptop. 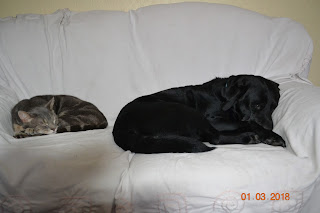 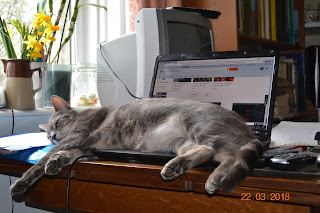 Back soon with some eco-warrior stuff.
Welcome to Anette, Jackie Walker, Janice and Nigel Hunt. on Bloglovin and Janipi P on the follower bar. Thanks ever so much for following.
Gillx