I had a different post to this planned in my mind but Sue in Suffolk posted pictures of she and her sister in matching dresses, which jogged me to post this one.

Here are my girls on holiday in Wales 39/40 years ago. 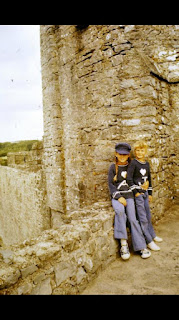 The jumpers were knitted in wool that was very cheap, so I bought pounds of the stuff. I remember it was in this dark blue, dark green. dark brown and white. The girls had sweaters and cardies David had a couple of tank tops (well, it WAS the 70s) and I had a jumper and a poncho.
The girls  never complained about  those sweaters so I always assumed they liked them. Fast forward 30 years and the granddaughter says "How come we never got sweaters with our initials on them "? "Because we try not to embarrass you" was her mother's reply!
Three weeks ago we had our rare family holiday in the Wales and an idea began to form.. No I don't have time to knit a couple of sweaters, but thought it would be good to reenact the girl's photo. The memory is that it was taken at Manorbier castle, which was perfect as our cottage was in Manorbier.
ED found some tea shirts of a similar blue on the internet and already had a lot of white felt from some project or other. She and YD cut out the shapes and YD machined them on.
When we got to the castle for "The Shoot" we couldn't find the spot the first photo was taken from. On inquiring it seems that it was taken at Pembroke castle !!
Never ones to let the truth get in the way of a good story we carried on hence 'ta da!... 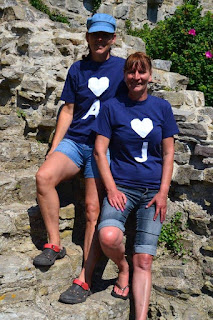 Like all our plans when the girls and I get together, this plan had developed into" a bit more fun" (depending on your sense of fun/the ridiculous) So those grandchildren need not feel left out .. 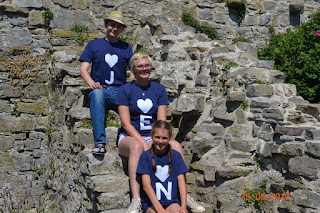 And while we were on a roll and with  two family members dragged kicking and screaming (well actually they just grumbled a little) to join in our"bit of fun" and Memory Making I give you the Von Trapp/Osmands from Derbyshire! 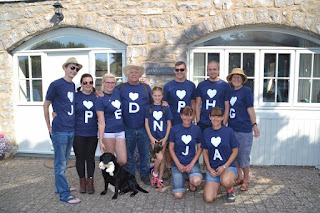 Remiss of us not to make one for Sammie, but those friends of ours who decided this was a difficult game of human Scrabble have used him as a blank (an "s" would have been no help)
Well, there you have it folk don't get any dafter than us lot when we are together and have inmbibed a few ciders.
Back soon with my planned post
Love from (getting) sunny Cornwall
Gillx
Posted by Frugal in Derbyshire at 11:59