Helloooooo
Sorry for the break in posting. This is partly because of our holiday and then because of a garden full of produce that needs attention and also there is much happening with the Civic Society at the moment. I have managed to read a few blogs but that is all I have done blogwise.
So I'm now "back in harness" and have much to write. Firstly I need to complete the Preparedness posts.
Thanks to those who have joined in with ideas and experiences, from surviving hurricanes and floods to 9 months without electricity! Suggestions of work gloves, underwear and identity documents to add to the "Grab Bag" (Sol, Joan and Tricky Wolf). Joan and TW both point me to the SAS Survival Guide. Anon in the US reminds me that in tough times it is more than possible that cash points etc won't be working, so keep some cash with you.
Angela Merkel is clearly reading these posts and is advising Germany to keep some stocks in! Resulting (obviously) in empty shelves etc! Whatever AMs reason for this advice, if nothing else it might help a few more people consider being prepared.
Over forty years ago David and I watched a TV serial called "The Survivors". The scenario was that 90% of the world's population had died from a virus and those who remained had to learn how to survive. We watched it avidly saying to each other "We would do that better" and  ",Why don't they do such and such?".It was the flame that fanned our ambition to be self sufficient. Of all the sudden disaster story lines I've always thought this to be the most likely to happen.
My guess is that extreme long term survival situations are likely to be predictable. Climate change, oil and world food shortages etc. may well creep up on us, but creep they will, giving us time to realise that harder times are ahead. Armageddon-type situations are far less likely but would also result in a situation where nothing is the same ever again and we will need to pit our wits to survive.
Eventually your food stores will run out (and you can't eat money) which brings me back to.. SKILLS.  Tricky Wolf suggests bushcraft and foraging skills, which I consider to be the most essential skills to practice and hone. I'm not suggesting you go native in the park for a few weeks ( I have a picture here of thousands of people sleeping in the park in the middle of town!) but read books such as the SAS Survival handbook and watch a few prepper videos, just to put ideas in your mind. Nobody can do everything, but we all have some ability to develop. These skills we can take to the table in our group/ family Come the Day.
You don't need to live in the country either. before we moved to our smallholding we lived in a semi-detached house in a large estate. here we kept rabbits for the pot -  just three large hutches attached to the back of the garage and a run on the lawn and foraged greens from the roadside were needed to produce 60 rabbits a year (could easily have been more) We grew great beans against the fence on the rabbit poo, learnt lots of ways to cook rabbit, cured the pelts and made some slippers and a (bizarre) Davy Crockett hat!
Joan from Wales has a great idea that I will personally take up. Like many of you I have bookcases full of "how to" books on sewing, cooking, preserving etc. Joan rightly says that we can't put all those books in our Bug Out Bag. She keeps an exercise book in which collects only those recipes she will use (looking at your recipe books I'll bet you only use a couple or so from each book) or prints out  "How To" blog entries, similarly she copies out basic knitting and sewing patterns. I'm really excited at this idea. I have already photocopied and reduced in size a page on seed saving and a basic hat pattern reduced to the absolute minimum space. I personally have much of this knowledge, but to collect it together for my nearest and dearest to use too is equally important to me.
As I have written these post I have realised that a 100 posts wouldn't cover all I and others have to say. I would like to discuss the social aspect of survival (of the fittest? - I hope not!) as a retired Social Worker I find this particularly interesting but don't feel I could do it justice here. Suffice to say that being able to get on with others is probably the most important skill you could learn if you wish to survive. I don't subscribe to the hunker down and look after yourself in isolation in the woods type of survival as I believe it only works short term (unsustainable) and even though living with others is difficult it is essential to well-being and future growth.  Anybody disagree?
Finally, how do we defend ourselves when SHTF - "S**** Hits The Fan"?  If you are the only person in your street who has food and heat how long before your neighbours (or a marauding gang) ask and then demand you share your hoard? ooh er. There are many who will not hesitate with an answer and while I know that being able to defend you and yours will require a weapon I hesitate to suggest it as it flies against everything I believe in. I would always want to negotiate, but know that not everything is negotiable and not everyone would negotiate and are likely to be armed themselves. So I guess my answer to my own question must be that should things start to look really bad we would reluctantly arm ourselves. You have no idea how hard it was for me to write that!
As they say at Uni... "Discuss" let's hear it folks!

Only a lighter note (how could it be anything else?!) Here are some photos of part the garden which is so overgrown this year, partly because of the weather but mostly because it has rather got away from me this year. Hope the colours and fecundity lift your spirits! 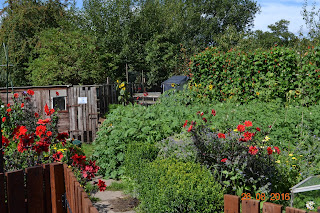 The potatoes (Sarpo Mira) have absolutely taken over. I do hope the crop is as big as it promises to be. In this picture you can see that it has grown over the box hedges and onto the path. Sunflowers and beans ( Moonlight, Borlotti, Butter and Prizewinner) behind and entrance to the chicken run/orchard. 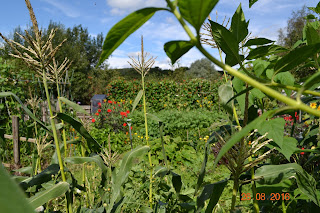 The sweet corn (Lark) is good this year too, with large ripe cobs. 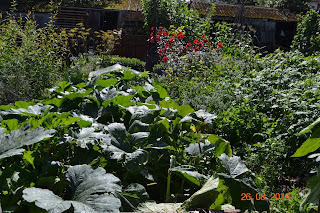 The marrow patch. While we were away some humungus marrow grew in hiding (photos next time) 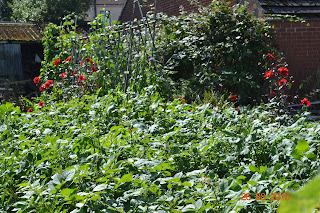 Looking across the potatoes to another bean row ( Emergo, Lazy Housewife, Cobra) with blackberries behind 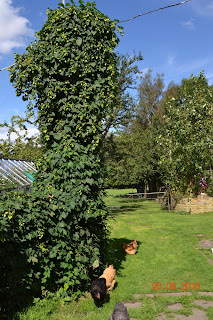 One of the Hop (bines?) Fuggle.

That's enough for today.
I look forward to your input/ views/ arguments !
Love Gillx
PS I seem to have lost a couple of followers.. is it the depressing posts or the long gaps between posting I wonder?!
PPS I will probably bore you with a couple of holiday shots next time.
PPPS And I shall start discussing preserving the crop.


Posted by Frugal in Derbyshire at 11:29