Planning for pigs and a Birthday Boy

I don't give a blow by blow account of my days. I'm lucky enough to lead a pretty busy, interesting life (well I think so) but only post when the mood takes me and today is one of those days!.
The bees are out for cleansing flights again today, but it looks as though they will be tucked up again for a few days as a cold front approaches. As always we have enjoyed getting ready for the "worst" I know we should be more grown up but we like to prove to ourselves that we can cope with anything that life and the weather throws at us. I suppose it is the Self-Sufficient side of us.
David has cut a lot more logs today on his new cutting bench that our eldest daughter and her husband bought for him at Christmas. It is so much safer to use, with a holster and blade guard that frees up one hand if needed. 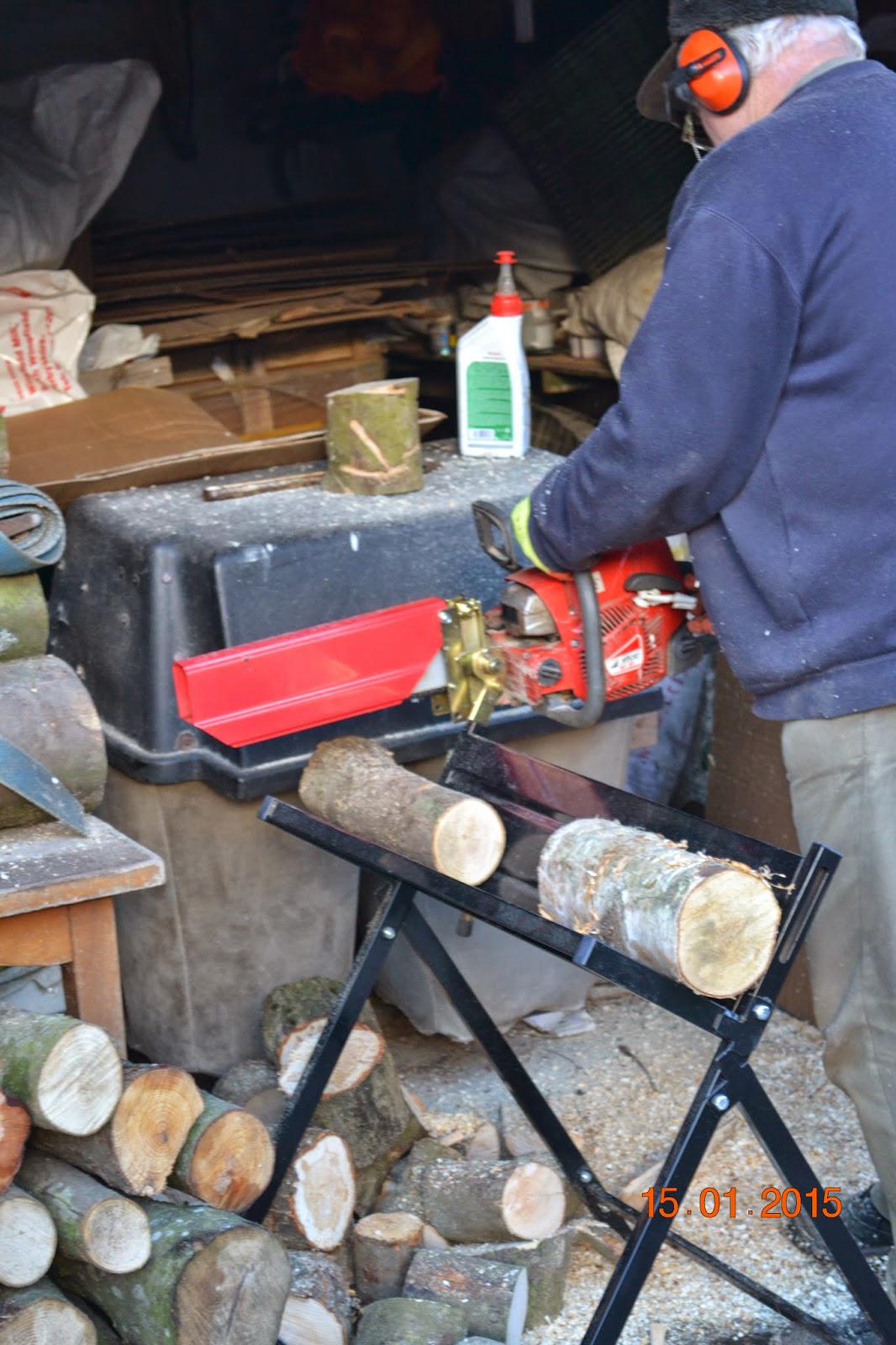 The ground has been a little dryer the last couple of days, so I have covered the strawberry beds that the chickens have been decimating with some coarse compost and then netted them. They should pick up by spring (the strawberries that is) I have also been digging up the jerusalem artichokes, while the ground isn't too muddy.
David and I have also been moving laying boxes and rabbit hutches around the barn to make room for the pigs that we hope to get in the next couple of weeks. We have been giving a lot of thought as to how to feed them as cheaply as possible. Obviously we must feed them with a proper pig food to ensure that they get all the nutrients they need. If we feed them entirely with pig food we estimate that the meat will cost us as much, if not more, as pork bought directly from the butcher. Clearly they will have a good life with us and be reared with respect and love (yes, and why not?!) But my blog doesn't have Frugal in the title for nothing. We aim to supplement their bought food  and make the rearing of them cost effective i.e. cheaper.
Feeding pigs is a serious business here in the UK and governed by strict rules. Feeding scraps to pigs is illegal. Feeding pigs any food that has seen the inside of a "food room" is also illegal. "Food room" means my kitchen, a restraunt or anywhere where food is prepared that may have had any contact with meat. So, for example, if I pick a bucket of apples and take them into the kitchen to sort the blemished from the keepers, I cannot then feed them to the pigs. If I sort them outside then I can. I can feed rejected peas from a local factory because they only deal in peas and no other product, so I have asked them if we can have their sweepings, but haven't heard yet. My friend works in an old mill and keeps the sweepings for us. We have now saved several bins of this wholemeal, organic flour, which are also allowed. My several stands of artichokes are going to come in handy as apparently pigs love them. As I have said I am currently digging them up while they are at their best, cleaning and drying them and putting them aside. All the small and misshapen potatoes, apples, pumpkins and parsnips that are currently in store outside will go to the pigs too. Finally we now have, courtesy of our Godson, several bags of spent maltings a week from a local micro-brewery. So bring 'em on!! I'll keep a careful account of the cost and share it with you.

The family, plus our friend that cuts everybody's hair while she is here, were here for tea on Sunday. This is usual but this time it was in the nature of a birthday tea for David. His birthday is actually on Tuesday, but what's a day or two? This birthday is a special one as he is 70. He was told that he would be lucky to make his sixties some years ago when we was fighting cancer. Since then he has had several health hiccups and open heart surgery and has proved them all wrong. The wonderful NHS, being bloody-minded and having a wife that practices a "studied neglect" has helped!
Here he is, sans Freddy Boswell hair, with the dog's breakfast that is a chocolate fudge cake. Looks weak doesn't he? 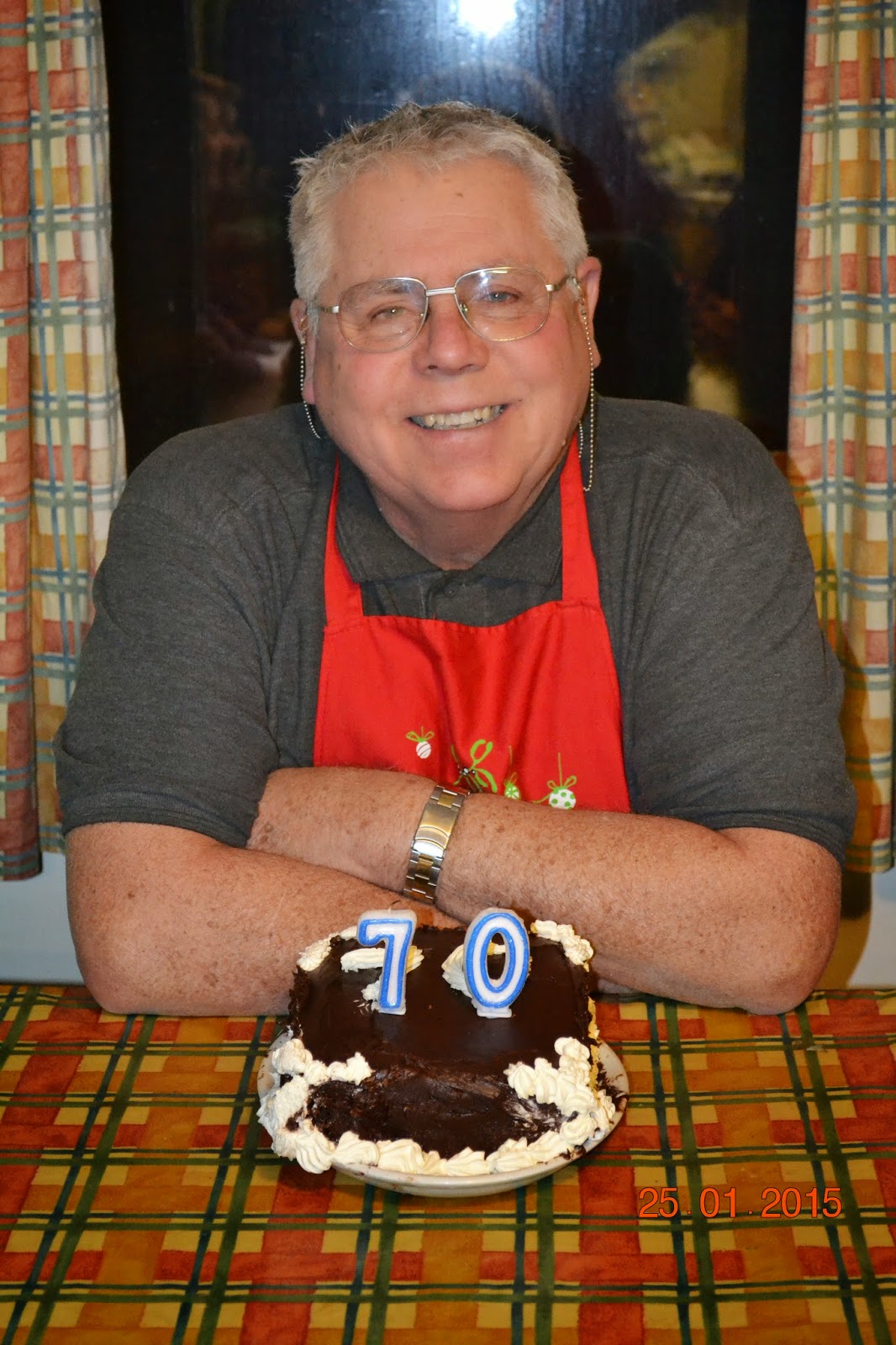 He here is with YGD doing Sudoku from the book she bought him. They enjoy doing these together. 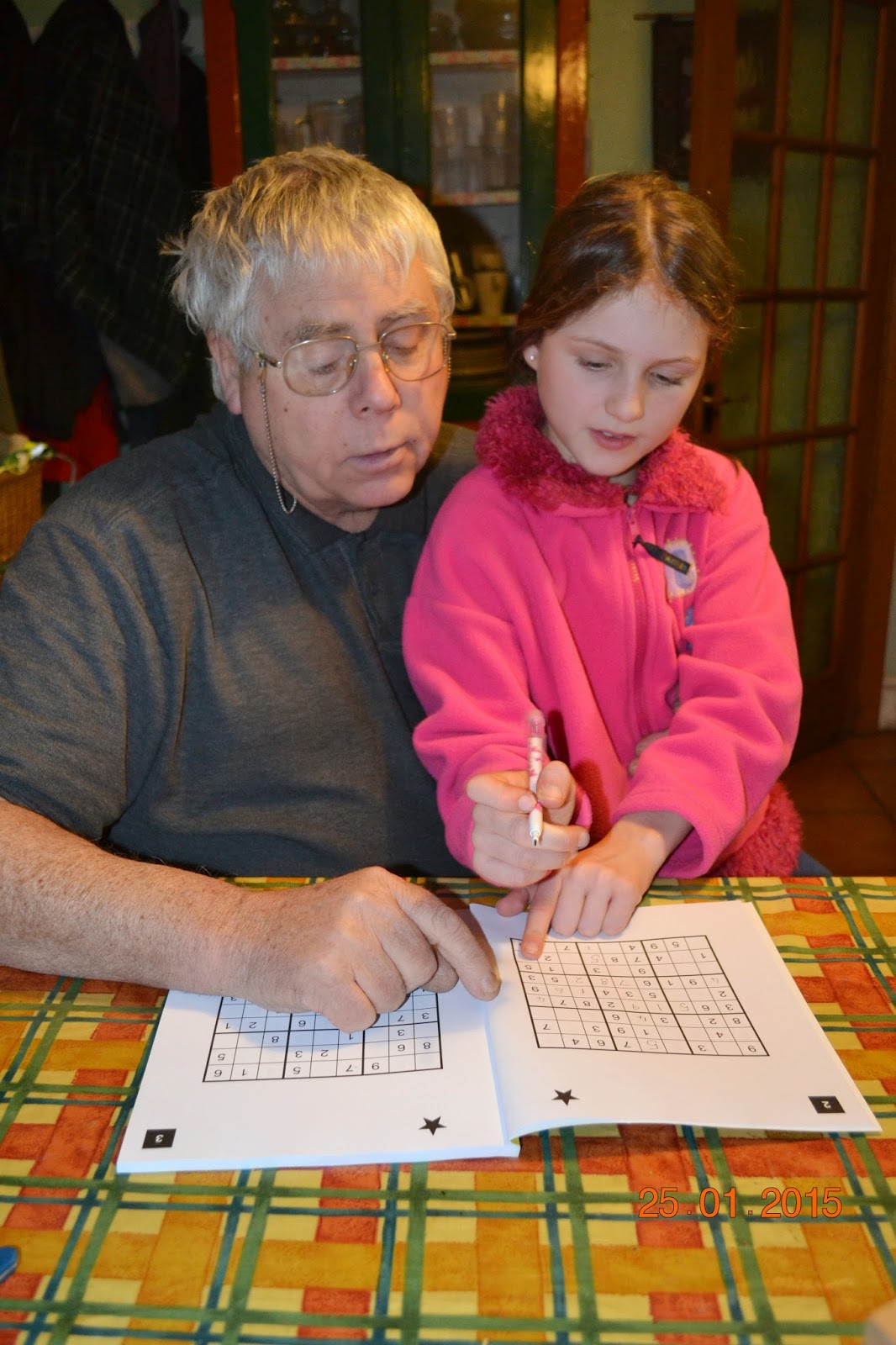 His "big" birthday present is a day out with his children and grandchildren (and me) at Harry Potter World. We are all very excited at his present. I have another "big"present to give him tomorrow on his actual birthday. I have bought him a turn table so that he can play the pile of LP languishing in his cupboards. This is very gracious of me as it will mean that I will have to suffer his marching music and folk music.
That's all for now. I am off to watch the last of the series of "Walking the Nile" which we recorded last night while we were out. We have really enjoyed this short series.
After tomorrow, I shall be busy getting ready for a couple of important Civic Society meetings and while I won't be posting I shall still be keeping up with my favourite  blogs.
Keep warm and safe dear Frugellers
Gillx

Posted by Frugal in Derbyshire at 21:31