Hello fellow Frugellers!
A special Hello to Kita, Sandra Nix and Val Derbyshire on Blog Lovin and Jeanette on my follower sidebar.

Right, let's get the rubbish news over with first.
On Friday morning, before we set off for our Cornish Fishing weekend. I went out to feed the animals. I let the three lambs out into the paddock and gave them their bottles. Back to the barn to feed the rabbits and the nursery crew and found two chicks all on their own in the barn, with no sign of an adult..The mother hens with their single chicks were snug in their little runs within the barn and the four broody mums sat firmly on their eggs. So where was mummy hen and her side-kick (good friend)? I walked around the holding looking for them and found the feathers in the fruit garden...Mr Fox had called. We had left the top of the barn door open for the swallows and Rufus had taken his chance.
The list I leave for my daughter when she takes over from us, had to be amended to include increased fox-security. I also set up a heat lamp for the chicks as a frost was expected.
Next into the house to make up and refrigerate bottles for the lambs for a couple of days. Archie still not looking too strong, but drinking his bottle with gusto.

The journey to Cornwall was horrendous with some serious accidents, roadworks and shear weight of traffic but we got there safe and sound and to bed early as we have an early start to Looe on Saturday morning. I drove D. to the boat and returned back to my friend's ready for a good old gossip and my mobile rang. It was YD to say that she had gone out to feed the lambs this morning to find that Archie had died in the night!
I had to explain what she had to do with poor little Archie re. fallen stock disposal, ear tags, movement books etc. Poor  YD what an awful thing for her to have to do.
What she didn't tell me was that most of my bean plants had been taken by the frost, even though they were under glass. There wasn't anything either of us could do about that. 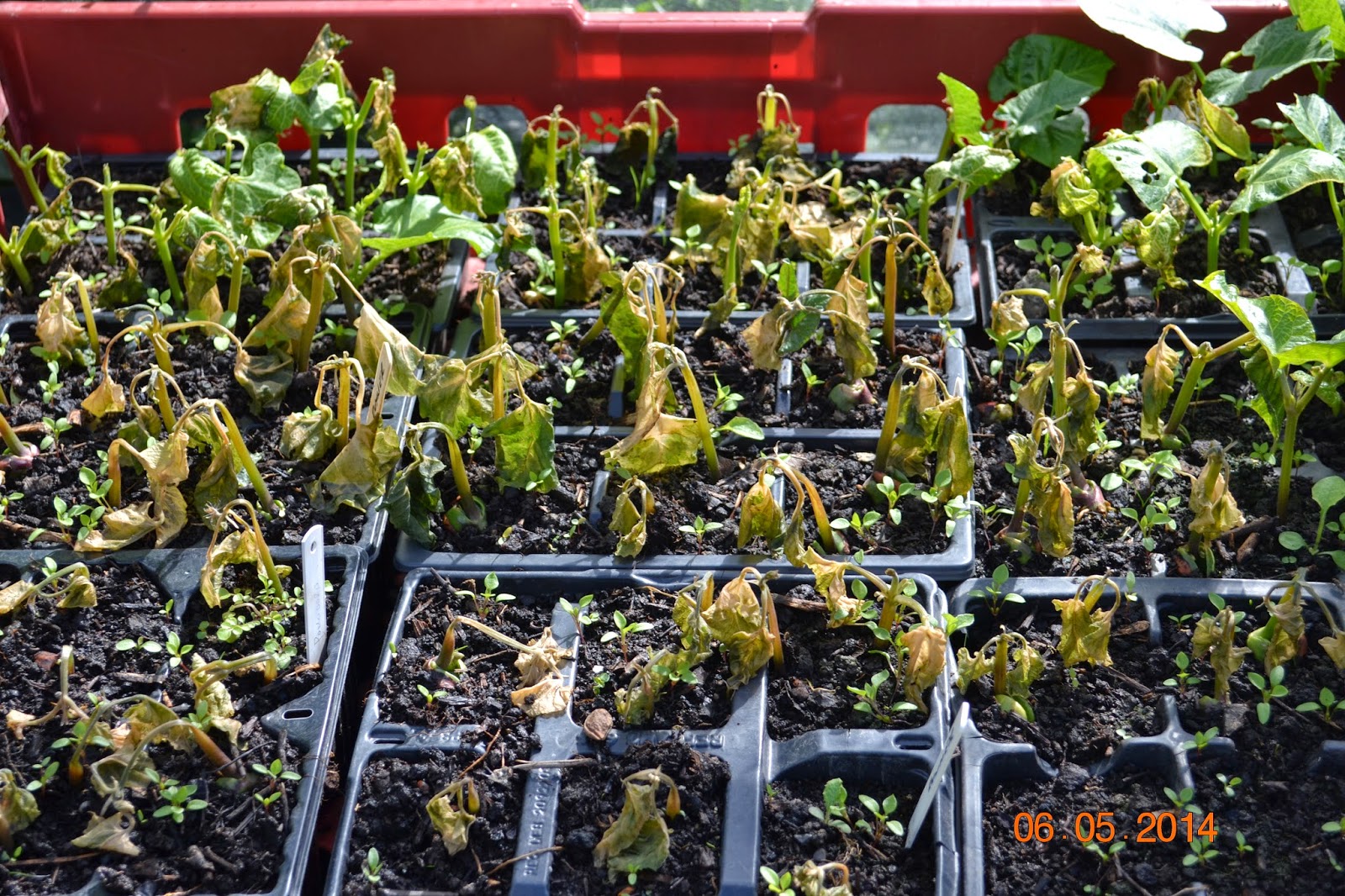 I think that that is all the rubbish news. So onto the Good News...I feel as though I ought to end this post like Pam from  A Good Life in Tydd with ..."Reasons to be Grateful"....

The four new hens have settled in so well that I am struggling to identify which ones they are.

I have plenty of spare beans saved and have pre-soaked and re-planted some to replace the frosted ones.

The tomatoes are doing so well in the greenhouse that I have been pricking out the plants, some of which have flowers.

Another chick has been born.

We have had another swarm, which me were able to collect and box. Now numbered Hive No 8.

My daughter, granddaughter and a couple of friends turned out on Sunday to do a spot of digging for me, which meant that I was able to plant, Purpel Sprouting Brocolli, Calabrase and Greyhound Cabbages on Monday.

Over the weekend a neighbour sent us a large bunch of asparagus from her allotment.

D. has now sieved enough compost to fill both the greenhouses and many seed trays and plant pots.

ED bought another trailor of wood from her friend's

As you see much to be thankful for.

All for now. Off to read some of my favourite blogs.

ooh nearly forgot..D.caught some fish! I processed 10 pollack for the freezer, which yealded 11 pound of fillets.
Gill


Posted by Frugal in Derbyshire at 09:28